Although customers will be pleased to start operating the aircraft after a two-year certification delay, the performance gains revealed by Embraer could be even more important for the type’s future. 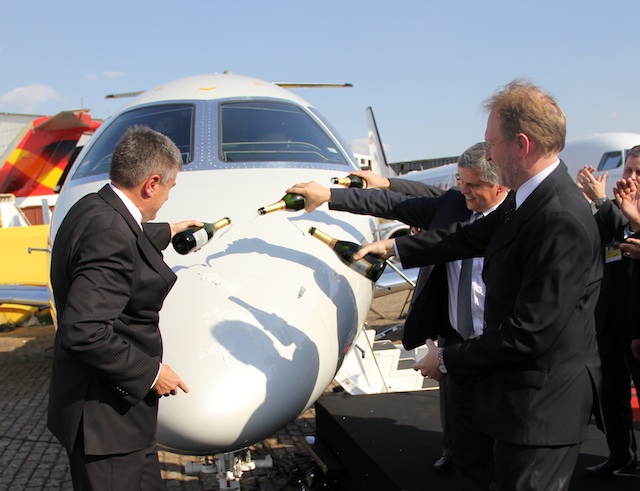 Since launching the Legacy 500 at the EBACE show in Geneva in 2008, Embraer has talked about the potential of the twinjet to bring certain characteristics typical of larger, super-midsized jets to the midsize class, such as longer range and a bigger baggage compartment.

Now, the company can also claim that the Legacy 500 will deliver the take-off distance typical of midsize jets with a range profile approaching the super-midsize class. The certificated Legacy 500 can take off in 1,250m (4,080ft), compared with the originally promised 4,600ft.

“The closest competitor is 4,800ft,” Pelligrini says. “So you’re going to be doing some missions that the other competitors – they cannot do it, or they do it with some limitations.”

Pellegrini’s comments underscore the company’s strategic aim to challenge the super midsize class with the Legacy 500. Typical midsize competitors, such as the Cessna Sovereign or Citation Latitude, boast take-off tolls at maximum take-off weight at sea level under 4,000ft. Bombardier lists the super-midsize Challenger 350, however, with a take-off roll of 4,800ft.

Embraer also reveals that the range of the certificated aircraft is slightly higher at 3,130nm (5,788km), or very nearly matching the 3,200nm range listed for the Challenger 350.

It is no surprise that Embraer hopes to make the Legacy 500 appeal to the super-midsize class. Demand in the smaller segment has remained stubbornly “shy”, as Pelligrini says, since the market collapsed in late 2008. Certain models, including the Hawker 700/800/900 series, went out of production altogether. Super-midsize jets have fared better, although not so well as the fully recovered large-cabin sector.

Embraer’s next task is to usher the mid-light Legacy 450 jet through certification tests. The aircraft first flew last December, and Embraer believes the flight-test programme can be completed within 600 flight hours. Certification is scheduled for mid-2015.

Achieving certification on the Legacy 500 came only after surmounting a mostly undisclosed list of obstacles, including one noted problem with integrating the fly-by-wire system.