Turkish Aerospace Industries (TAI) officials packed the balcony of the company's chalet to witness the first Paris display conducted with its Hurkus turboprop trainer on the opening day of the show.

The indigenous type is making its first international appearance, after TAI sent a pair of A-model aircraft to Le Bourget.

Özcan Ertem, head of TAI's aircraft group, says the first three of an initial 15 Hurkus B basic trainers are now in final assembly for the Turkish air force, with the lead production example to make its debut flight in November. A further five aircraft are now in the manufacturing process, he adds, with production set to hit two a month. 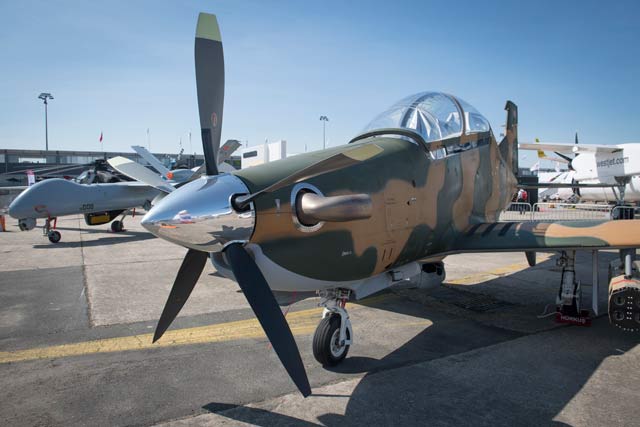 "All deliveries will be made in 2018," he says, and the first will be handed over next June. The Turkish air force also has an option on a further 40 examples, he notes.

TAI secured Turkish civilian and European Aviation Safety Authority certification for the Hurkus A last July. The Turkish air force is acquiring B-model examples featuring an advanced cockpit supplied by Aselsan, with the update to be the subject of a supplemental type certificate from the Turkish government.

One Hurkus is taking part in the flying display, while the other is in TAI's static display representative of a future C-model light-attack variant. The Turkish land forces command and Gendarmerie plan to acquire 12 and six examples, respectively, with the same number of options each.

Ertem expects deliveries of the Hurkus C to commence in 2019, and notes that the programme's 16th production aircraft should be the first armed example of the Pratt & Whitney Canada PT6-powered design to roll off the line.

TAI sees clear export potential for the Hurkus, although it is not naming prospective customers. "There are a few countries looking for the Turkish air force to induct the type and start flying," before advancing their interest in the type, Ertem says.