Details are emerging of the aircraft to be used in the new James Bond film, which include a specially-modified former British Airways (BA) Boeing 747-200.

Filming for Eon Productions / Sony Pictures' Casino Royale, which features Daniel Craig as James Bond in his first mission as a "00" UK special agent, has been in progress since earlier this year. The 21st film in the franchise is a prequel to previous movies that sees Bond up against a villain who bankrolls international terrorism.

Dunsfold Park airfield outside London has been the location of scenes replicating Miami airport at night. Virgin Atlantic Airways boss Sir Richard Branson has announced he will play a cameo role in the production and one aircraft seen flying in and out of the airfield is a Virgin Airbus A340-600. Additionally, two Air Atlantique Douglas DC-6 freighters have also been flying for the past three weeks, says a source at the airfield.

However, most interest has been sparked by a decommissioned, modified 747, which has been transformed into a hybrid bomber (pictured below). 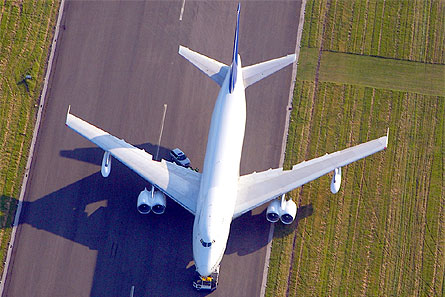 The non-flying aircraft, formerly G-BDXJ, but now badged with the fictional Hollywood registration N88892, was previously in the BA longhaul fleet and has also seen service with Atlanta Air Cargo. The aircraft will eventually be scrapped, but has been used by various film and television productions in the interim.

Since being ferried empty a year ago from London Gatwick to the former Hawker aircraft factory airfield, where it landed on the officially closed 1,800m (6,000ft) runway, the aircraft has had its engines removed.

Organisers of Dunsfold Park's annual vintage car and air show, Wings & Wheels, are hoping at least one of the aircraft featured in filming for the Bond film will be on show.  Eon was not immediately available for comment.