An interim fix for a critical safety problem in the F135 engine for the Lockheed Martin F-35 could soon become permanent or be replaced by a redesigned system, Pratt & Whitney says.

In mid-year, the engine manufacturer will re-evaluate the interim solution now being applied to address the “blade rubbing” problem that grounded the F-35 fleet for three weeks last year and caused the aircraft to miss a highly anticipated debut at the Farnborough air show, says Mark Buongiorno, P&W’s head of the F135 programme.

Although the programme “feels very good where we are right now” with the interim fix, it might constrain how the F135’s performance can be improved over time.

The issue arose last June when an F-35A at Eglin AFB, Florida, caught fire while on a landing roll. The pilot escaped unhurt but the fire damaged the aircraft heavily and caused a fleet-wide grounding until the cause of the fire was known. Investigators traced the problem to the third stage integrally-bladed rotor, where blades rubbed against a polyimide foam seal on certain manoeuvres well within the operating envelope of the singled-engined fighter.

The fleet returned to flight but with a limited flight envelope to prevent manoeuvres that would trigger a rubbing event. Last September, programme officials implemented an interim fix to remove the operating restrictions without having to redesign the blade tip or sealing system. The rubbing occurred because normal operations did not carve a trench into the seal as expected, so P&W carved a “pretrench” into the seal. 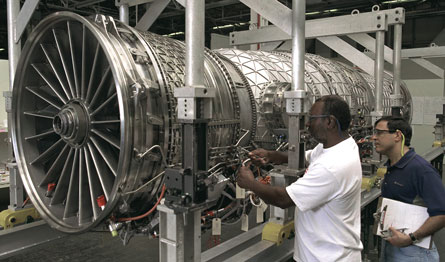 That interim fix is now being retrofitted into F-35Bs assigned to a US Marine Corps squadron scheduled to be the first to enter operational service later this year, Buongiorno says.

Although it meets the requirement, the pretrench solution slightly reduces the efficiency of the airflow through the engine.

“We've determined that the hit associated with the rubbing issue is not significant,” Buongiorno says. “But we do want to – for potential future growth or other things – evaluate and understand what a good rub and seal looks like. So we’ll be evaluating mid-year whether we want to stick with the pretrench or a different rub system for that stage.”