UK investigators believe they have traced a fault that led to the grounding of the UK Royal Air Force's fleet of Grob Aircraft G115E Tutor basic trainers, following a pair of forced landings, to a problem with the counterweight assembly on the type's Hoffmann three-blade propellers.

In both incidents a counterweight assembly detached from the base of one propeller blade, severely damaging both that blade – in one case it was severed around halfway along its length – and the spinner under which the counterweight is housed. The pilots of both aircraft were forced to make emergency landings as a result.

The 119-strong G115E fleet was grounded on the back of the second incident, and although the trainers have progressively been returned to service, full availability is not expected before the end of 2013.

The first incident took place on 23 August 2012 when the G115E (G-BYUB), operated by Babcock on behalf of the RAF, was performing a series of touch-and-go landings at RAF Cranwell in Lincolnshire in the east of England.

Shortly after the final take-off and while in the initial part of the climb, says the report from the UK Air Accidents Investigation Branch, "a loud bang was heard", followed by "severe vibration". The pilot successfully executed an emergency landing in a field of crops near to the airfield, the report says.

Subsequent examination of the aircraft revealed one propeller blade was "severely damaged" and was missing its counterweight assembly, which was unable to be located. 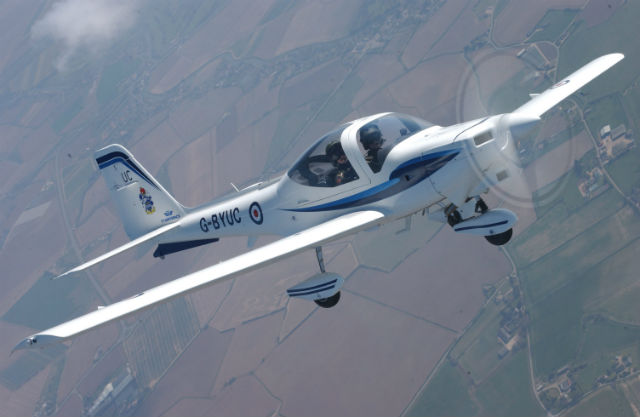 Four months later on 9 January 2013 a second aircraft (G-CGKC) suffered a similar occurrence, with corresponding damage to the propeller and spinner.

Portions of the relevant components were located in this case, however. Later metallurgical analysis of the debris revealed the fatigue failure of one of two bolts that clamp the two halves of counterweight to the aluminium ferrule at the base of the wood and composite propeller.

The AAIB believes that the design of the clamp, which allows the possibility of uneven loading of the bolts during assembly, is the likely cause of the failure.

It points to an independent review conducted by the operator that concluded it was "difficult to align both faces [of the counterweight assembly] exactly parallel", while at the same time keeping bolt torque settings within a tight band.

The combination of airframe, Lycoming AEIO-360 engine and Hoffman HO-V343K propeller is "unique to this fleet", the AAIB says, having shared its findings with both operator and propeller manufacturer to "enable them to develop a 'return-to-service' strategy", it says.

Babcock says the fleet have been progressively returned to service since May, with full availability anticipated by year-end.