Russian analysts have conducted windtunnel tests to verify the performance of the preliminary wing design of a proposed long-haul widebody aircraft.

The windtunnel work was carried out during November at the Moscow-based Central Aerohydrodynamic Institute.

It involved a 1:26 scale model of the proposed twin-engined aircraft, primarily the forward fuselage, wing and powerplants. The model's wingspan is 2.15m, suggesting a span of some 56m for the full-size jet.

Illustrations of the model indicate that it was not fitted with winglets.

The institute has not specified whether the model represents the CRAIC CR 929 being jointly developed between Russia's United Aircraft and Chinese aviation specialist Comac.

Over the duration of the test the windtunnel simulated speeds of M0.8-0.9 and angles of attack ranging from zero to 10°.

The institute says the designers aim to reduce aircraft weight by narrowing the wing – which raises particular issues with airflow over the wing-tips at high angles of attack.

But it states that the wing "meets requirements" for stability and handling, as well as aerodynamic performance, at speeds of M0.85.

Developers intend to install next-generation engines on the aircraft and use a composite wing with "low mechanisation", says the institute. 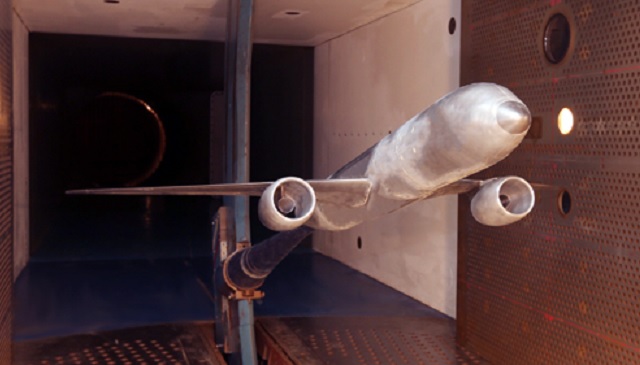