NASA is investigating whether falsely certified titanium could cause a “catastrophic failure” of a mechanical support component in its $450 million Kepler space photometer, a planet-finding satellite slated for launch on a Boeing Delta II rocket from the Kennedy Space Centre (KSC) in Florida in March.

The action follows a final indictment issued by the US Attorney’s Office in San Diego on 4 December against San Diego-based Western Titanium and four of its executives.

The document claims the group defrauded the US government by falsely certifying titanium parts used for the engine mounts in Air Force F-15, F-22 and C-17 aircraft and for spacecraft.

“They certified the titanium was tested and met the specific stringent testing requirements, when in fact it did not, causing purchasers to unwittingly place into serviceable stock for use on the aircraft, parts made from substandard and nonconforming titanium,” according to the US Attorney’s office.

One of those unwitting customers was Kepler spacecraft prime contractor, Ball Aerospace, which used Western’s titanium for the “spider ring”, part of the primary spacecraft structure. 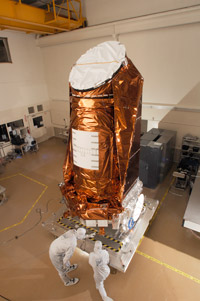 Internal emails among agency officials on 10 December show a great deal of concern over the suspect materials, “….it was concluded by the program personnel that the substituted titanium was a mission catastrophic risk should it fail,” wrote NASA lead counsel Richard McCarthy in a 10 December internal email obtained by Flight International.

“As a result NASA requested assistance from the (Office of Inspector General) for documents that would help them determine the material properties of the titanium so that the program could decide if the movement of the vehicle to KSC should be delayed.”

NASA’s general counsel, Michael Wholley, in an associated email said that testing will be done to determine “the suitability” of the material, but adds, “we cannot, I imagine, get a ‘re-do’ accomplished in time if it turns out that the Kepler mission has a defective critical part.”