SYERS-2 integrated on Global Hawk ahead of first flight test

Northrop Grumman has completed integration of the UTC senior year electro-optical reconnaissance system (SYERS-2) on board its RQ-4 Global Hawk unmanned air vehicle, ahead of an imminent first flight test with the type.

The payload was provided by the US Air Force for 30 days from the beginning of February for testing using the universal payload adapter – a multi-sensor connector for Global Hawk jointly funded by Northrop and the service.

SYERS-2 testing will lead to the integration of the next generation of the system – the MS177 multispectral sensor – when it reaches initial operational capability (IOC) in 2017.

Northrop expects to carry out four flights from its Palmdale, California facility, using the sensor on two aircraft provided by the USAF. These are the first Global Hawks that will reach IOC with the MS177.

“The real goal is about risk reduction in line with the MS177 timeline,” Mike Tarlton, director of Global Hawk at Northrop, tells Flightglobal. 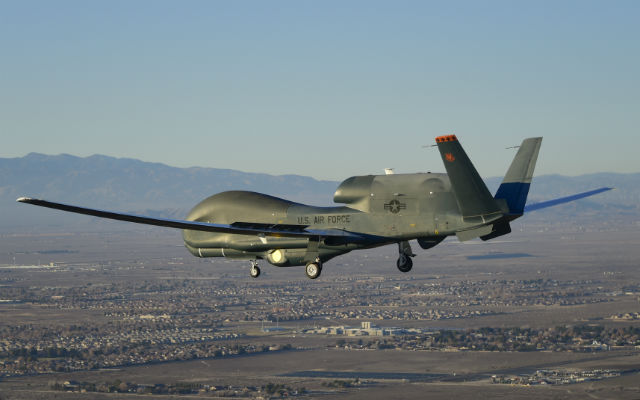 SYERS-2 is typically flown on the manned Lockheed U-2 Dragon Lady aircraft, which the Global Hawk will ultimately replace when the U-2 retires from service after some 50 years supporting USAF high-altitude surveillance.

Meanwhile, a letter of offer and acceptance for Japan’s acquisition of the Global Hawk is anticipated, expected to be followed by a request for proposals.

A US state department authorisation granted last November paved the way for a potential purchase of three aircraft, plus two ground control stations. If the proposed $1.2 billion sale goes through as planned the first aircraft could be delivered in the 2018-2019 timeframe.