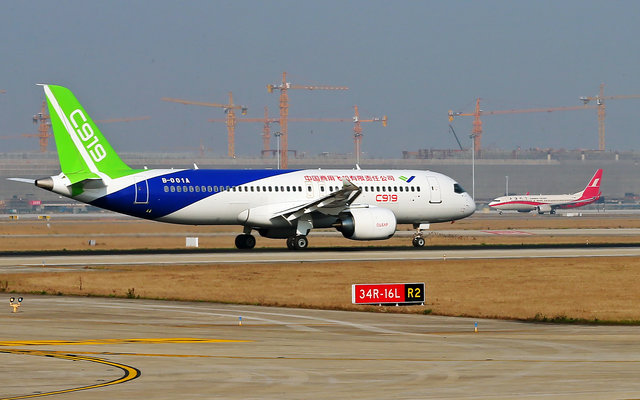 Onboard aircraft B-001A as it took off on an overcast Shanghai day are a team of five. In the cockpit are flight test captain Cai Jun, co-pilot Wuxi and flight observer Qian Jun. In the cabin are two flight test engineers – Zhang Da Wei and Ma Fei.

The first flight will lasts about 1.5 hours, during which the CFM International Leap-1C-powered aircraft's landing gear will not be retracted, Comac's flight test manager You Li Yan told reporters in Shanghai. The aircraft is expected to reach an altitude of 10,000ft.

The first flight was witnessed by more than 2,000 guests, staff and journalists. The event, graced by Chinese politicians, was also broadcasted on the country's main television networks.

You says the pilots have been tasked to check 15 parameters during the maiden sortie. These include testing the aircraft's flight control response, verifying the functionality of various systems, and to cross-check that the test equipment are providing accurate data and information.

Most importantly, he adds, the pilots will get to "have a sense of flight control", for a feel of the 158-seater jet.The aircraft has been fitted with test equipment, but pictures released by Comac also show passenger seats in the cabin.

The Chinese manufacturer has allocated 4,200 flight test hours for the C919's test programme, and is targeting for the aircraft to enter into service within three years.

Comac has so far secured commitments for 570 of the type, with Shanghai-based China Eastern Airlines as its launch customer.