US airlines go big on Havana in Cuba applications

US airlines are eager to serve Havana under the newly signed air services agreement with Cuba, seeking nearly three times the number of available frequencies.

Alaska Airlines, American Airlines, Delta Air Lines, Eastern Air Lines, Frontier Airlines, JetBlue Airways, Silver Airways, Southwest Airlines and United Airlines all filed applications for the 110 available daily frequencies to Cuba, 20 of which are to Havana, with the US Department of Transportation today.

Together the nine carriers have applied for nearly 75 frequencies to Cuba, including nearly 52 to Havana. A 10th passenger carrier, Spirit Airlines, is also expected to apply for the frequencies. 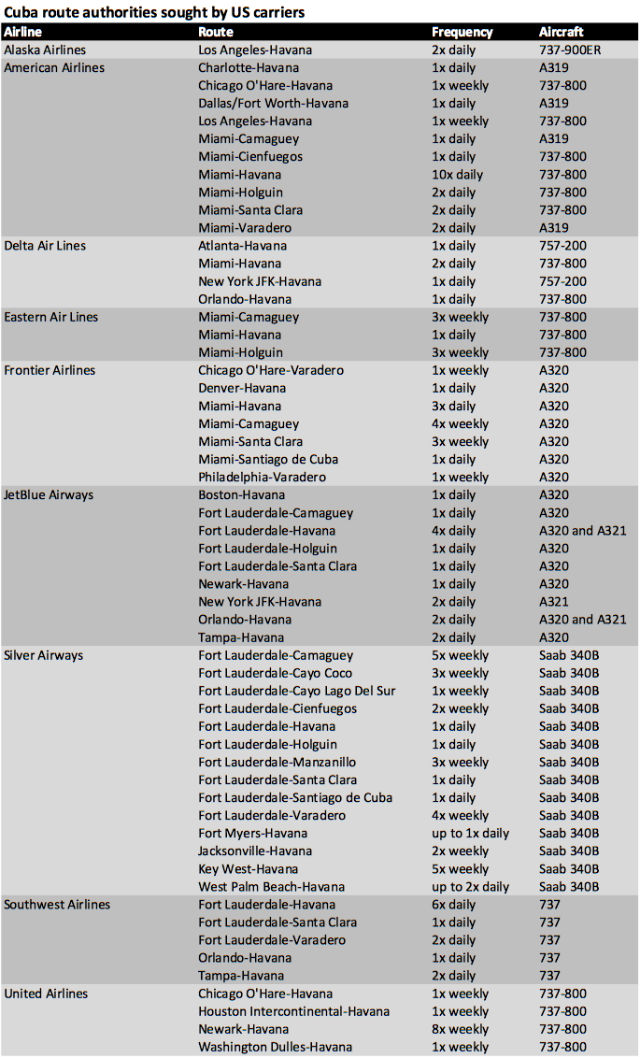 American has requested more than 20 frequencies, the most of any single carrier. The majority are from its Miami International airport hub, which serves the largest population of Cuban Americans in the USA.

“American’s proposed service – from Miami and four other hubs – will provide a strong foundation for the sustained future growth of commercial and cultural ties between the U.S. and Cuba,” says Doug Parker, chief executive of the Fort Worth-based Oneworld carrier, in a statement.

American is also seeking frequencies to serve Havana from Charlotte, Chicago O’Hare, Dallas/Fort Worth, New York John F Kennedy and Los Angeles. All of the flights would be operated with Airbus A319s and Boeing 737-800s.

JetBlue applied for 15 Cuba frequencies. The New York-based airline plans to primarily serve the country from Fort Lauderdale, as well as from Boston, Newark, New York JFK, Orlando and Tampa. It would fly Airbus A320s and Airbus A321s to Cuba.

Silver is the only US carrier that wants to serve all of the 10 available cities in Cuba with a request for nearly 11 daily frequencies. The regional carrier would fly to all of the available destinations from its Fort Lauderdale base as well as to Havana from Fort Myers, Jacksonville, Key West and West Palm Beach with its fleet of Saab 340Bs.

“We are making a strong commitment to serve all of Cuba, including the nine cities beyond Havana where much economic development is expected,” says Jason Bewley, chief financial officer of Silver, in a statement.

Frontier applied for a little more than six frequencies. The majority are from Miami, where the Denver-based airline wants to fly to Camaguey, Havana, Santa Clara and Santiago de Cuba, but it also outlines plans to serve the country from Chicago O’Hare, Denver and Philadelphia with A320s.

Delta applied for five frequencies to Havana from Atlanta, Miami, New York JFK and Orlando. It plans to fly 737-800s and Boeing 757-200s on the routes.

In a surprising move, Alaska is seeking two-daily frequencies to Havana from its Los Angeles focus city. The Seattle-based carrier would operate the flights with Boeing 737-900ERs.

Recent start-up Eastern Airlines applied for nearly two frequencies for service to Camaguey, Havana and Holguin from its Miami base. It would fly 737-800s on the routes.

United submitted one of the smallest requests for Cuba frequencies to the DOT. It is only seeking around 1.6 frequencies for its planned eight-times weekly service to Havana from Newark and once-weekly service to the Cuban capital from Chicago O’Hare, Houston Intercontinental and Washington Dulles.

The Chicago-based Star Alliance carrier would fly 737-800s to Cuba.

Florida-based Spirit, which had previously said it plans to seek some of the new Cuba authorities, has yet to file an application.