Wideroe to be E190-E2 launch operator

Norwegian regional carrier Wideroe will be launch operator of the Embraer 190-E2, making a move up to jet operations after years of operating Bombardier turboprops.

The airline will place its first E190-E2 into revenue service in the first half of 2018, and the remaining two E190-E2s will be delivered later in the year, Embraer commercial aviation president and chief executive John Slattery tells FlightGlobal.

He declines to be more specific with the delivery timeline, pending arrangements with the airline.

Wideroe has purchase rights for an additional 12 E-Jet E2 aircraft, in a deal worth $873 million at list prices if all orders are exercised. The order was announced in January.

Slattery says an Embraer team is in Norway working with Wideroe to prepare for the launch of the E190-E2. “We are hopeful that after we have a successful entry into service, perhaps we will see some reasonably quick movement on firming up of the options,” he says of Wideroe’s purchase rights for an additional 12 aircraft.

Wideroe is configuring its E190-E2s in a single class configuration of 114 seats. 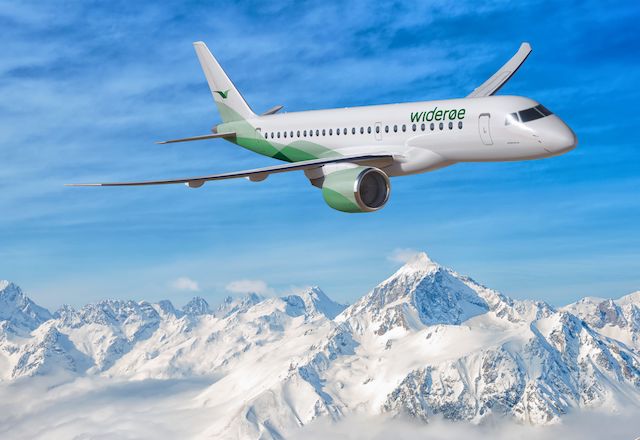 Despite being a loyal Bombardier customer for years, the airline had said it had decided on the E2 after concluding that the Bombardier CS100 was too large for its markets.

Slattery says the E190-E2 programme is “slightly ahead of schedule”. He adds that the airframer is confident that Wideroe will not experience the type of issues reported by current generation E190 launch customer JetBlue Airways, which took first delivery in 2005.

“As an OEM we have generated and developed more clean sheet aircraft designs than any other OEM in the last 20 years,” says Slattery, pointing to Embraer’s aircraft programmes in the commercial, defense and business aviation sectors. “The technology and development of knowledge have given our programme and engineering teams the confidence on the E2 entering into service on time, and on specifications.”

“It’s a testament to the other campaigns we have around the world, with not only existing operators but also new operators,” he says.