Leonardo’s helicopter division believes it has managed to overcome teething troubles on the AgustaWestland AW169 and is now ramping up production of the medium twin.

In addition, the manufacturer appears set to announce a performance upgrade, lifting the maximum take-off weight (MTOW) by 200kg (440lb).

And in a sign of continued market support for the helicopter, at Helitech UK emergency medical services operator Specialist Aviation Services (SAS) doubled its commitment for the type with an additional six orders.

Earlier this year Leonardo chief executive Mauro Moretti disclosed that unspecified issues had “delayed progress” with the production ramp up following the AW169’s certification in July 2015.

But, speaking at Helitech on 11 October, Stefano Bortoli, sales and marketing senior vice-president, insisted that those glitches were now dealt with.

“The teething problems on the aircraft are now behind us. We are confident that the next few months will be satisfactory and the ramp up is progressing well.”

Leonardo delivered just one AW169 last year, but Bortoli insists that 2016’s total will nonetheless be “significant”, noting that it would hand over “at least one each week for the rest of the year”.

He says the issues relating to the early aircraft were mostly related to “cabin comfort” such as noise levels and cold spots produced by the air conditioning system.

In addition, a problem with certain landing gear actuators has required a retrofit solution to be rolled out to affected helicopters.

But better news could be on the way for operators, with the airframer strongly tipped to increase MTOW to 4.8t, up from 4.6t previously. 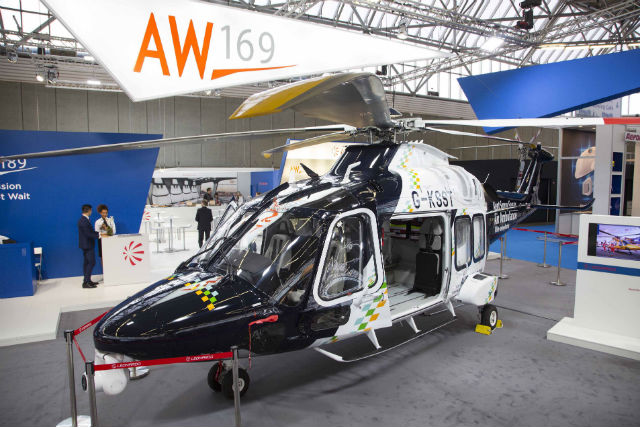 Bortoli declines to confirm or deny the upgrade, but simply says: “Customers that are going to take delivery of the aircraft over the next few weeks will be happy with its performance.”

Meanwhile, SAS, which signed a framework agreement at Helitech for six additional AW169s, will shortly put its first of three delivered aircraft into service with the Kent, Surrey and Sussex Air Ambulance Trust - displayed on the manufacturer's Helitech stand - with two more to follow by year-end.

“The market is there [for the AW169]: the acceptance of the original six went exceptionally fast. I have every confidence that that we will place the second batch as fast as the first,” says Henk Schaeken, managing director of SAS.

The last of the first group will arrive in April 2017, he says, and the initial example from the second tranche is scheduled for delivery two months later.

And launch customer Lease Corporation International (LCI), which has so far received five of the type, has delivered the first of three examples of the Pratt & Whitney Canada PW210-powered helicopter to Italian EMS operator Elitaliana.