Airbus has recorded its largest number of orders in a single month since March, with agreements for 11 aircraft – all of them single-aisle jets.

The airframer has listed orders for six A220-100s during October, including a pair for executive operator Comlux, following its unveiling of a business jet version of the aircraft. 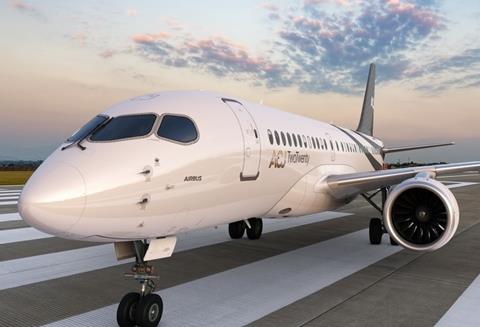 Its latest backlog data shows that two A320neos were ordered by an entity identified as Skyserv, while an undisclosed customer has signed for two A321neos.

Airbus has also disclosed that the customer for four A220s is also taking a single A320neo.

Macquarie Financial Holdings appears to have reduced its own A220 orders again, with its backlog cut by three aircraft, from 37 to 34.

The agreements take Airbus’s net orders for this year to 308.

Airbus had recorded 290 net orders in the first quarter but the figure increased by just 10 in the subsequent six months. October’s increase of 11 is the highest monthly order intake since the 60 recorded in March.