Airbus appears to have delivered its 13,000th aircraft during October, although it has not identified the specific operator involved.

The airframer delivered 72 aircraft over the course of the month, its highest monthly figure this year, taking its overall total for 2020 to 413.

But the manufacturer has not previously claimed the 37 Bombardier CSeries jets delivered before Airbus acquired the programme and rebranded it as the A220. Adjusting for this leaves 13,002 deliveries.

The round-figure delivery appears to have taken place on 30 October, when Airbus formally handed over nine aircraft. 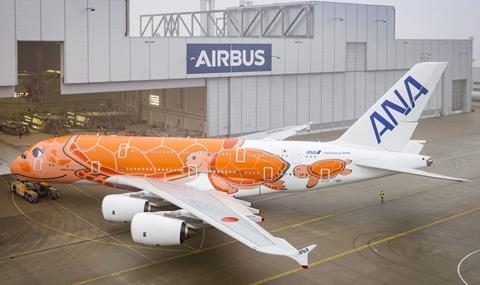 All Nippon Airways has taken delivery of three A380s

These included a single A380 – the first to be delivered this year – for Japan’s All Nippon Airways, plus six A320neo-family jets and two A220s.