Airbus Defence & Space has disclosed its receipt of orders for a combined 20 C295 medium transports from multiple customers so far this year, and confirmed the delivery of a first example to a new Latin American operator.

“This year has been very good,” says Antonio Rodríguez Barberán, head of commercial for Airbus Defence & Space’s Military Aircraft unit, who identifies Ecuador as having ordered three C295s. The other 17 are for undisclosed customers, he says.

A first C295 transport for the Ecuadorian air force was delivered on 6 June, and “the remaining two will be handed over later this year”, says Airbus. Its order builds on the previous supply of C212 maritime patrol aircraft to the nation’s navy, and C212 and CN235 transports to its army. 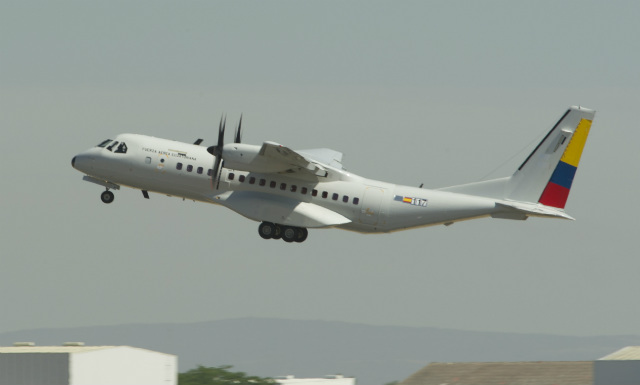 Of the remaining 17 newly-ordered aircraft, three transports each are believed to be for the Philippines and Vietnam. Barberán says eight have been ordered by a nation in the Maghreb region of north Africa, while another three of the total are in an intelligence, surveillance and reconnaissance/search and rescue configuration for an existing C295 operator in Latin America: believed to be Brazil.

Three C295s are currently on the final assembly line at Airbus’s San Pablo site near Seville, Spain for Ecuador, Egypt and Vietnam, along with one CN235 in production for the US Coast Guard. Single examples for Egypt, Kazakhstan and Oman are also involved in pre-delivery flight-testing at the location.

The 20 new aircraft on order mean that Airbus has almost filled its production capacity on the medium transport for 2014 and 2015, Barberán says.

A special operations/gunship version of the C295 with an electro-optical/infrared sensor, synthetic aperture radar and armed with a 30mm cannon and up to six under-wing weapon hardpoints is also to be available soon.

“What we are having is very intensive dialogue that is about to end with an industrial partner and a customer, and we are expecting an announcement of the customer very soon,” says Barberán. Airbus is also discussing a possible signals intelligence configuration with other potential buyers.

Meanwhile, all C295s to be delivered from mid-2015 will be produced with a strengthened wing capable of being equipped with winglets, says Airbus. The improved C295W production standard is expected to secure certification later this year, with flight-testing having been performed since April.