Airbus Helicopters has flown the second prototype of its new medium-class H160 rotorcraft – the first to be equipped with the new 1,100-1,300shp (820-969kW) Turbomeca Arrano engines that will power production models.

Its initial flight-test article – which uses the Pratt & Whitney Canada PW210 powerplants now dropped from the programme – had accumulated 75h by the end of 2015 since first taking to the skies in early June. It has validated the helicopter's handling characteristics and been taken to a speed of 176kt (325km/h). 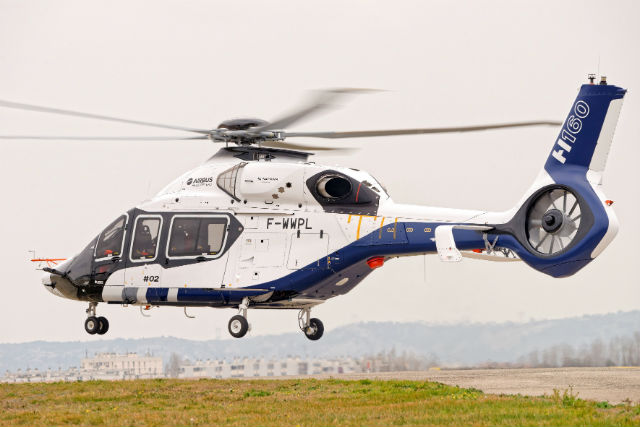 “After a very busy year [in] 2015, in terms of flight activities, introducing PT2 is an important step in the H160’s development as we will launch performance testing with the Turbomeca Arrano engines,” says Bernard Fujarski, head of the H160 programme.

A third flying prototype of the medium twin, due to arrive this year, will be used for the certification effort, with EASA approval and service entry due in 2018.

But 2016 will be a busy 12 months for the airframer as it pushes ahead with the H160’s development: it aims to begin taking orders for the 5.5-6t helicopter this year, as well as inaugurating “an all-new automated final assembly line” in the second half.

Engine manufacturer Turbomeca says more than 10 Arrano test engines have been running at its Bordes, France site since the first ground run in February 2014. It claims the trials have validated claims of a 10-15% cut in fuel consumption over comparable engines.