AirTanker is on schedule to deliver an Airbus A330-200 to Thomas Cook Airlines by May under a lease arrangement.

The aircraft has arrived at AirTanker's facility in Brize Norton, UK, for preparation to the leisure carrier's specification.

One of 14 A330s being acquired via the UK military's Future Strategic Tanker Aircraft (FSTA) programme, the widebody is the first of five that could be called on to provide a "surge" capability for the Royal Air Force beyond a core fleet of nine.

The service already flies eight tanker-equipped Voyagers, which have so far accumulated a combined 8,600 flight hours and delivered over 4,000t of fuel, while a ninth aircraft is retained on the Civil Air Register and used by AirTanker. More than 64,000 passengers have been carried by the latter capability, and over 3,200h flown on routes including between the UK and the Falkland Islands.

Having already been modified as a two-point tanker for the UK in Spain, the programme's 11th aircraft arrived at RAF Brize Norton from Airbus Defence & Space's Getafe plant near Madrid on 5 February, having previously being painted in Manchester. 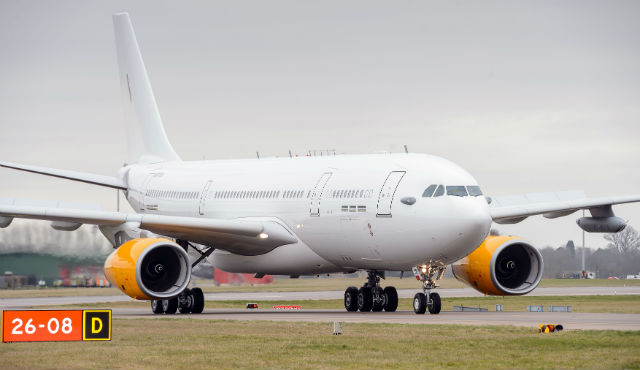 "It will now go into a three-month in-house conversion," AirTanker says, with the process to involve the removal of all military modifications, such as the two under-wing hose-and-drogue refuelling pods and countermeasures equipment.

The company also will install 320 new seats and a seat-back in-flight entertainment system to the aircraft, which was completed with a single-class, 291-seat layout.

"Once complete, the aircraft will be registered by AirTanker on the Civil Aircraft Register as G-VYGK ahead of its scheduled operation in support of Thomas Cook Airlines' UK long-haul programme from May," AirTanker says. 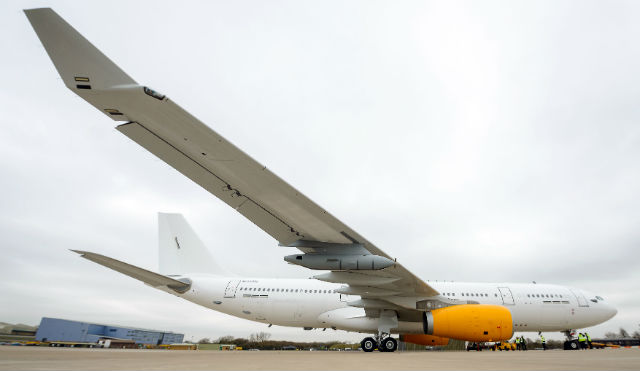 In June 2014, Thomas Cook entered into an initial three-year lease agreement with AirTanker for the aircraft, when it outlined plans to employ the asset on routes from Glasgow, Manchester and London Stansted to locations including Cancun, Las Vegas and Orlando from 1 May 2015.

"The delivery of the aircraft at Brize Norton is a major milestone for our civil leasing business," says Tony Carder, AirTanker Services' director of aircraft leasing.

Remaining aircraft contained within the FSTA deal will be delivered by the fourth quarter of 2016, with AirTanker seeking to find commercial and/or military applications for the rest of the surge fleet.