AIX: Boeing to offer LIFT by EnCore economy seat in 787

Boeing is unveiling at the show today an all-new economy class seat for the 787 – its second major collaboration with new player LIFT by EnCore.

It follows the launch at last year’s show of California-based EnCore’s 737 economy seat, which the airframer selected as a line-fit and retrofit option for NG and Max versions of the narrowbody.

Unlike the 737 seat – which was adapted with Boeing from an existing design – the nine-abreast Dreamliner seat has been conceived “from the ground up, in collaboration with Boeing”, says Elijah Dobrusin, vice president of development and strategy at LIFT by EnCore. “It’s designed from a blank sheet. We’re really excited.” 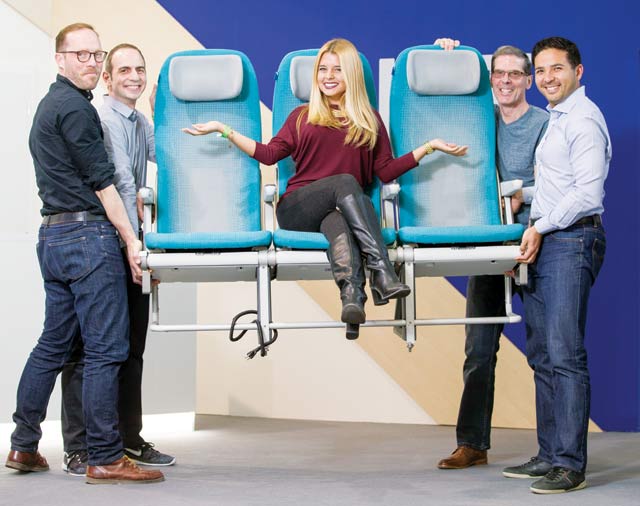 LIFT by EnCore – a division of the EnCore group, a specialist in composite products – will show a “high-end prototype” on its stand. “It’s as close to production as we can get it at this stage, but we will be taking feeback from potential Boeing customers,” says Dobrusin. The seat is scheduled for delivery to Boeing next year and to be available for customer delivery in 2019.

Although the seat will not be supplier-furnished equipment, the product is an “SFE hybrid”, he says. “The airline gets all the benefits of SFE in that there is no complex negotiation with an outside supplier, but where it becomes a hybrid is that [the airline customers] work with us on price.”

The seat is a “close cousin” of the 737 seat revealed at AIX 2016, “but the 787 one is optimised for the long-haul experience”, says Dobrusin. “There is a really neat recline mechanism, and the coat hook doubles as a headphone hook. There are a lot of small innovations. It’s a technology-centric seat. Ergonomics and comfort is where we spent most of our time.”

Since launching the 737 seat at last year’s show, LIFT by Encore has secured its first two line-fit orders from undisclosed Max operators for “more than 50 shipsets”.

“The past year has gone really well,” says Dobrusin. “We got a great kick-off at the show. It could not have gone any better. People saw it as a great combination of a nimble start-up with a major OEM.”

Boeing is also announcing at the show that Jamco will provide its forward-facing Journey B and rear-facing Venture business class seats as buyer-furnished equipment options for the 787.

Boeing is also to work with automotive supplier Adient to explore the aircraft seating and interiors market.

Adient, which was rebranded from Johnson Controls last year, is seeking insight from Boeing on technical specifications and US Federal Aviation Administration certification requirements, the Detroit-based company says.

“Through discussions with Boeing, we believe there’s an opportunity for Adient to raise the bar on the aviation passenger experience, building on our leadership in the automobile seat market,” says Adient chairman and chief executive Bruce McDonald.