As early as next year, Boeing could activate a robotic system to drill and fasten tens of thousands of rivets on the 777, as the company makes its boldest move yet in automating assembly of major aircraft structures.

Automation has crept slowly into aerospace manufacturing. Flex-track machines are now used to drill holes in many structures, but the process of manually riveting and bucking the fasteners into the holes has remained almost unchanged for decades.

“In many ways we still build fuselages like we did for the 707,” Boeing vice-president and general manager for the 777 programme Elizabeth Lund says. “And so we’re sort of excited about taking this next step and improving how we’re doing this.”

Riveting and bucking is currently a two-person job. The riveter drills the fastener into one side of a structure.

On the other side, a worker holds a bucking bar – a steel anvil – that provides the back-pressure necessary to flatten and deform the fastener on the inside of the structure. The bucking function requires just the right touch – pressing too much or too little fails to install the fastener properly.

Boeing trains the two-person crews for several weeks to become proficient. The pair must learn when to signal each other to know when to start and stop applying pressure.

Despite training and experience, the repetitive, physically demanding work still accounts for the largest share of workplace injuries in the company’s assembly process. 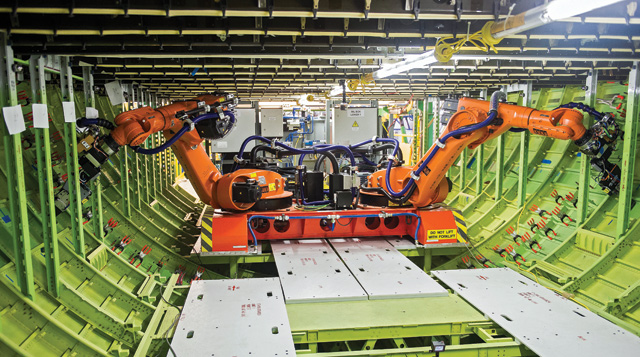 Starting more than a year ago, Boeing began secretly testing a robotic alternative to manual riveting and bucking. The machines were installed in a leased building in Anacortes – a Puget Sound community north of Boeing’s widebody final assembly centre in Everett. Laboratory testing had shown Boeing that it was possible for robots to sense the appropriate level of pressure to apply, simulating what a human does by feel.

The testing in Anacortes is evaluating new machines made by Kuka Robotics USA. The orange-coloured robots work in pairs, replicating human riveting and bucking functions. The robotic system – which Boeing calls the fuselage assembly upright build (FAUB) – remains in evaluation, but could be moved into the 777 production system early next year.

Fatigue tests on structural coupons so far indicate that the FAUB is superior to manual labour. “This does produce a better capability from a structural standpoint than manual riveting does,” Lund says. “We know it certainly is a much narrower band [of quality deviation]. If you look at manual riveting you see a much wider deviation.”

Boeing plans to use the FAUB initially to build the forward sections – numbered 41/43 – and the 46/48 aft sections of the 737 fuselage. The 44/45 sections in the mid-fuselage will be assembled manually, however, Lund says.

“We are working now on how we build [the mid-fuselage], but that’s still on the drawing board,” Lund says. “It just doesn’t have the complexity and the need for robots like this. We might be able to use some flex-track ­technology or other kinds of robotics. Something quite this advanced isn’t called for in the mids because the ­access is easier.”

As the FAUB is ­installed, structural assembly will move to new section of the building now under construction, called the 40-27 bay.

“We don’t have a firm cutover commitment,” Lund says. "If the testing goes well in Anacortes and we start to bring it down here we could be in production sometime next year.”

The pending introduction of the FAUB comes after a long, tense standoff between Boeing and its largest union – the International Association of Machinists and Aerospace Workers (IAM). In January, the union’s 30,000 members voted narrowly in favour of giving up pensions and other benefits in exchange for keeping 777 production in Everett.

Lund says the FAUB will improve productivity on the 777 line, but emphasises there are no near-term workforce reductions planned.

“Eventually, will [we] be able to build a fuselage with fewer people than it takes today? Yes,” Lund says. “Now, that said… there is a lot of work to do on the Everett site. I don’t want that translated into a reduction of the labour force.”

Boeing is relying on automation to cope with surging production levels across nearly all its commercial product lines. The 777 line has increased in rate to 8.3 per month from seven per month. Boeing has raised the 737 ­production rate from 31 per month to 42 over the past three years. Output on the 787 programme’s three assembly lines has grown five-fold in less than three years.

Robotic systems help by increasing productivity and flexibility, Lund says. Boeing can install two sets of robotic riveting and bucking pairs, positioning one on the main deck and one below the deck. The Kuka robots can also be installed without permanently attaching them to the floor of the factory, Lund adds.

“There will be nothing that’s mounted to the ground in this entire system except utilities – power, air, and so on,” Lund says. “Everything is moveable and flexible.

“So as we learn and adjust to this system it gives us the flexibility to reconfigure and continue improvements.”