Airbus added a dash of spice to the mid-range, mid-size market with last year’s launch of an updated version of its best-selling widebody, the A330. But in a sector where there are already several established types, is there enough room for another big twin to be dropped into the mix?

The numbers so far suggest there is. Building off the back of over 1,300 sales of the baseline A330ceo, Airbus has racked up 145 orders and commitments from seven customers for the re-engined, Rolls-Royce Trent 7000-powered A330neo since launching it at last year’s Farnborough air show. Not only does this tally put the aircraft well on its way to Airbus’s publicly-touted 1,000-aircraft sales target but it also includes several blue-chip customers, including Delta Air Lines and Steve Udvar-Hazy’s Air Lease.

The outline definition of the A330neo family is a fairly simple exercise: take today’s A330-200 and -300, add the new-generation Trent 7000 engines, some aerodynamic tweaks and a revised interior with “cabin efficiency enablers” (to create room for up to 10 more seats), and you end up with the A330-800 and -900, respectively. The latter is the lead variant, with service entry with an as-yet-unnamed launch operator in late 2017. 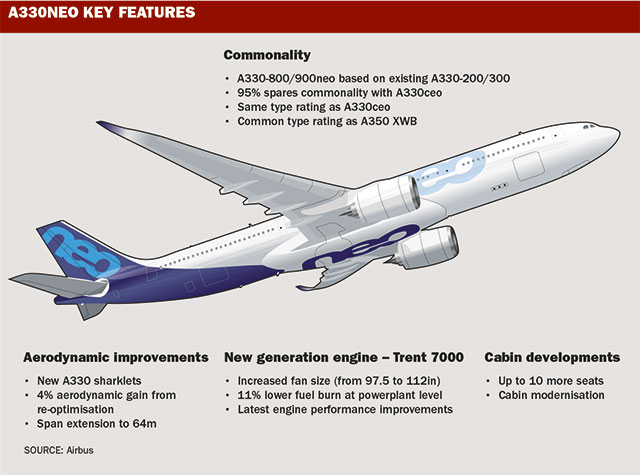 But when scrutinising the details of this warmed-up A330, some could be forgiven for feeling a bit of deja vu. As Boeing is quick to point out, the A350 started out over a decade ago as an A330-based airframe powered by 787-derived engines until Airbus regrouped and relaunched its assault on the Dreamliner with the all-new A350 XWB family.

In 2006, when today’s A350 XWB finally crystalised, things looked pretty bleak for Airbus in the widebody sector. The A340-600 was being trounced by the 777-300ER and the A330 was facing a huge threat from the 787 as Boeing rampaged across the globe signing up customers for its all-new twinjet. To make matters worse, Airbus’s eventual clean-sheet response, the XWB, was not due to deliver until at least four years after the Dreamliner.

Airbus took a pragmatic approach to its predicament, launching a counter-attack with the A330. The twinjet had at that time been in production for over a decade alongside its sister product, the A340, and between them they had accumulated an installed fleet of over 550 aircraft. So the twinjet had certain attractions of its own, not least of which were price, maturity and good availability.

Airbus’s aggressive sales strategy was already paying off when the 787 programme went into meltdown in 2007/08. This not only gave Airbus the breathing space it needed to get the A350 orderbook moving but also added impetus to A330’s renaissance as airlines sought capacity while the Dreamliner programme was effectively in limbo.

“[The 787 delays] made the A330 the only airplane available at that time,” says Boeing’s head of marketing, Randy Tinseth.

Airbus’s head of A330 product marketing, Crawford Hamilton, concedes that the twinjet benefited from the Dreamliner’s early woes, but is adamant that was only part of the reason for its success. “Undoubtedly, what’s gone on with the 787 has not been a hindrance to the A330’s success. What that leverages off is the fact that when you buy an A330 you get a product that is very reliable, you know what you are buying and you know when you’re going to get it, which is important if you’re trying to work out a schedule for next year and then you find out your aircraft might not be coming.”

And even with the 787 programme now over its crisis and production ramping up, Hamilton says the current A330 has still been giving a good account of itself.

But Tinseth, unsurprisingly, is not convinced that the A330 is all that Airbus claims it is cracked up to be: “Look at all the things Airbus has done to try to keep the A330 viable. First they went to a freighter configuration, then they tried to increase the take-off weight, then they tried to sell it as a domestic or regional airplane,” he says.

“None of those things were taking hold in the market so I don’t think we’re surprised they went forward to re-engine the aircraft and make other improvements.”

And Tinseth cannot resist reminding us that Airbus first tried to counter the 787 with a re-engined A330 proposition when Boeing launched the Dreamliner.

“This is the airplane they brought to the market 10 years ago when oil was $40 a barrel,” he says. “And the fact is, it didn’t do well. When the fuel price was even lower than it is today, airlines looked at the value proposition of the 787 and they chose it. And we think they’ll do the same today.”

Hamilton is quick to dispel the Boeing history lesson, pointing out that today’s re-engined A330 is very different to the original A350 proposal.

“Our Neo recipe is keeping everything that’s good and changing the things where you get the biggest benefits,” he says. “It’s not an A350 Mk1. That was marked by lots of compromises everywhere. It was restricted by being based on another airplane. It was a good exercise in how not to do it, and we’ve learnt from that.”

Airbus says the changes it is introducing on the A330neo reduce fuel consumption by 14% per seat over the equivalent current A330, as well as providing a range increase of up to 400nm (740km). And the revisions will deliver significant reductions in operating costs.

“Per trip, the A330neo’s cash operating costs are 8% lower than the A330ceo, and per seat 11% lower, because we have the seat gain [through the cabin reorganisation],” Hamilton says.

Airbus claims a significant per-seat cost advantage for the improved models over the 787. Hamilton says the 310-seat A330-900 has cash operating costs 1% lower than a 304-seat (two-class), General Electric GEnx-powered 787-9 on a 4,000nm sector and this advantage increases to 7% when all operating expenses are included such as capital or lease charges.

Rob Morris, head of consultancy at Flightglobal’s Ascend advisory arm, believes that if Airbus’s claims for the A330neo are accurate, it could be onto a winner: “The A330neo should be able to offer direct operating costs which will match or better those of the 787, particularly at the 4,000nm medium range that Airbus is targeting the aircraft at and beneath which the majority of widebody passenger schedules are flown today. If Airbus can deliver such economics in the A330neo then yes, it can challenge the 787 with expectations of market success.”

However, Ascend is less bullish than Toulouse on the ultimate market for the re-engined jet. In its 2014 Flightglobal Fleet Forecast, Ascend predicted sales of around 550 A330neos over the next 20 years.

This chimes with Boeing’s view, with Tinseth conceding that he sees a modest long-term requirement for the A330neo: “We see a market for 400-500 airplanes over the next 10-15 years,” he says.

Tinseth also admits that the re-engining creates a more potent rival for the Dreamliner than the stillborn A350-800 which the Neo has effectively replaced in the Airbus product line-up.

“This is a better airplane than the A350-800, there’s no question about it,” he says. “That airplane was a simple shrink and didn’t have anything going for it.”

But this could be a problem for Airbus too, adds Tinseth. “That A330-900 is a bigger airplane than the A350-800. So it not only completes with our airplanes but frankly it’s going to steal share from the A350-900 if they price aggressively.”

Morris says that some element of the 500 A330neo sales that Ascend forecasts for the A330neo will inevitably come from the A350 market. “An economically optimised medium-range aircraft could potentially be attractive to some airlines that do not have the need for the longer range offered by the A350 XWB and 787. But there was also probably a greater risk that the 787-9 could have captured some sales that may now go to the A330neo.”

Hamilton says Airbus broadly sees the two widebody families as appealing to different markets, and emphasises the A350’s size and range advantage over the A330.

“The A350-900 is sold on the fact it is a bigger aircraft with more payload and more range,” he says, pointing to Delta’s order for a mix of A330neos and A350-900s as an example of how the two types are complementary to each other.

An important factor in Delta’s selection of the Airbus package over a 777/787 offering from Seattle was its installed fleet of A330s, and Hamilton says the plan is to use this leverage elsewhere in A330neo campaigns.

“The bedrock of any market is where you already are. With the A330, we’ve got a record number of operators for a widebody, at around 105-106. That’s your prime target because people already know the aircraft very well,” says Hamilton.

Air Lease’s Udvar-Hazy, who played a key role in launching the A330neo and has orders for 25 -900s, concurs that existing operators are leading candidates: “For an A330/A340 operator, the A330-800/900 is an economical replacement alternative.”

He adds that for an existing Airbus operator, “the A330-800/900 is an effective next step and quite competitive with the 787-8, particularly in terms of capital cost advantage”.

Hamilton says Airbus is also targeting – for both the current version and the Neo – the 777-200 and 767 replacement markets, “and where the competition maybe hasn’t come up to scratch and there’s opportunity. Consistently we’ve been outselling the opposition and therefore we’ll just try and keep that up.”

But one inevitable challenge that Airbus faces before it completes the transition of production to the A330neo is to sell the remaining delivery slots for current-generation models in the production cycle.

“They’ve got to figure out a way to fill the A330 line, which looks pretty bleak,” says Tinseth.

Morris believes Airbus still has a “significant number” of A330ceo slots to sell, despite the recent announcement that production will be reduced from the current nine aircraft a month to six in the first quarter of next year, He estimates this move has reduced the target by around 100 units.

“Assuming transition to full Neo production by the end of 2019, then there would appear to be around 300 A330ceo slots remaining to be produced from the beginning of this year,” says Morris.

Ascend estimates that the A330ceo’s true backlog (adjusted for customers such as Kingfisher Airlines that will not take their aircraft) is around 166 units.

“Fourteen aircraft have been delivered to date this year, indicating that 180 of those 300 estimated slots have firm customers. So that still leaves 120 aircraft to be sold under this scenario. 2016, 2017 and 2018 look particularly challenging, with an estimated 34, 42 and 36 slots open respectively,” says Morris.

“In the face of this challenge, Airbus may be forced to offer some serious ‘last-off-the-line’ discounts to encourage customers to purchase these aircraft,” he adds.

So Airbus still has some hurdles to clear as it brings the A330neo to market, but just under a year into the programme will be relatively pleased with its progress so far. What remains to be seen is whether the market really is as big as it predicts.