Professor Luigi Pascale is a living link to the post-war heyday of Italian aviation. The sprightly 93-year-old still spends most of his days at the Capua premises and even flying the products of Tecnam, the light piston-aircraft manufacturer he co-founded in the mid-1980s and which has since produced 4,500 aircraft. Tecnam came some three decades after he established his original Naples-based company, Partenavia, developer of, among other types, the twin-engined P.68, rights to which are now owned by Vulcanair. He remains a legendary figure in the country’s general aviation industry.

Today, Tecnam – headed by his nephew Paolo Pascale – is a company with its sights on the future. In July it flew for the first time its P2012, a nine-passenger, Lycoming TEO-540-powered piston twin very much in the spirit of the P.68, but bigger and – more than four decades on from its early 1970s precursor – considerably more modern. With about 50h flying under its belt so far, Tecnam hopes to have the aircraft – the company’s biggest yet and which it has designed in co-operation with Massachusetts-based airline Cape Air – certificated and in service by early 2019.

Tecnam is expanding its factory at Capua – which it opened in 2008 – in readiness for volume production of the P2012. Although Cape Air has not placed an order beyond a letter of intent, Paolo Pascale says the carrier needs to replace its 90-strong fleet, mostly comprising ageing Cessna 402s with a handful of Britten-Norman Islanders and Cessna Caravans. Cape Air’s executives, he says, are “ready to commit”, and Pascale is hopeful of follow-up orders. “We have several other airlines interested,” he says. 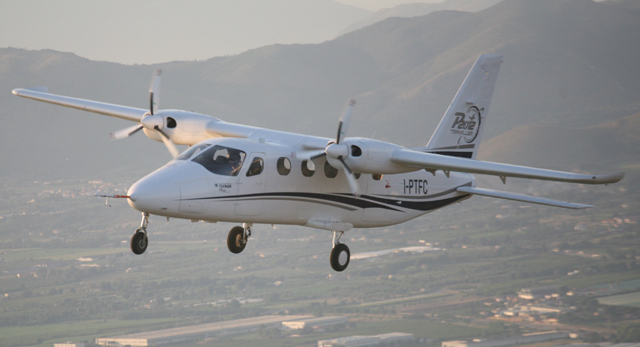 US carrier Cape Air is expected to be the launch operator of the nine-passenger P2012, with service entry planned by early 2019

A second P2012 will enter flight testing around June of next year, and Pascale expects both aircraft to complete about 300h of testing. A fatigue test rig model has been built, along with a fuselage mock-up, which has been displayed at air shows. Pascale says the type fits an unserved niche. Unpressurised, piston-powered and with fixed landing gear, the P2012 is designed for shorter hops at lower altitude than a Viking Twin Otter or Textron King Air. Its only rivals, he says, are the Quest Kodiak and Cessna Caravan, but “customers perceive very differently” these single-engine types.

The air transport-focused P2012 programme (all Tecnam’s programmes, as were those of Partenavia, are named after the year they were conceived) will transform a business that has focused largely on the recreational and training markets. Pascale expects Tecnam to produce about 170 aircraft this year, about half of which will be its Rotax 912-powered, single-engined two-seaters. These comprise its original and entry-level high-wing P92; the P2008, a largely composite and modernised version of the all-metal P92; and the low-wing P2002, aimed more at the training sector.

Earlier this month, the Argentinian air force ordered eight of the JF variant of the P2002 for basic training. Tecnam’s training market credentials are also reinforced by the high-wing P2006, also Rotax 912-powered but twin-engined and seating four. It will make up about a third of Tecnam’s output this year. The aircraft is largely used by flying schools and militaries for multi-engine crew training, but its low speed and “open platform” design also makes it suitable for surveillance and other special missions, says Tecnam.

Rounding out the portfolio and representing around a fifth of production is the P2010, another high-wing, single-engine aircraft but seating four, powered like the P2012 by the Lycoming IO 360 and, with its roomy rear, luggage compartment and third door, very much pitched at the recreational market in North America rather than the aviation purist – Tecnam describes it as a “grand tourer”. Deliveries began last year, with Tecnam’s new sales office in Sebring, Florida, key to pushing the model stateside.

A major change for Tecnam in recent years has been the decline of the self-build, kit plane market and a shift towards selling certificated types. The plus side of this is that – with their increased sophistication – factory-built aircraft do yield higher revenues. Now the bulk of the factory is devoted to production of certificated aircraft, although Tecnam still has a large machining area where it makes its own parts. Composite components – increasingly used on its line-up – are manufactured at a specialist facility in Naples, next to its former factory.

While the traditional regions of Europe and North America remain vital for Tecnam, it has a worldwide reach – its 30 dealers representing 60 countries – and China, says Pascale, has “the potential to be the biggest market”. Last year, Tecnam signed a deal with Liaoning United Aviation Shenyan (LUSY) to produce three models in China exclusively for the local market – the 2006T twin, two-seat 2008JC and the four-seat P2010 – in anticipation of demand from Chinese flying schools training the next generation of airline pilots. 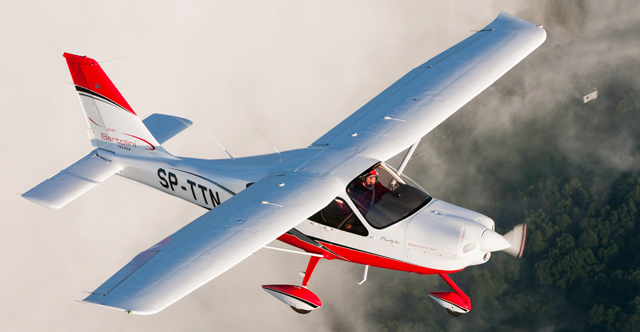 Described as a "grand tourer", the P2010 is pitched at recreational market in USA

Staff from LUSY are in Capua, getting to know the aircraft ahead of the start of production. “Co-operation is going very well,” says Pascale. Staff have finished training on the P2006 and will have completed instruction on the P2008 and P2010 by the end of the year. The first programme to be extended to China will be the P2006 – an aircraft very much aimed at training schools and already certificated in China – followed by the other two. Initially, the Chinese facility will focus only on assembly, but by the end of next, the plan is for it to move on to machining metal parts, says Pascale.

The P2012 remains the main focus for Tecnam, however. “Getting it to certification and launching production will keep us busy for the next two or three years,” says Pascale. “After that, the company needs to focus on the “organisation of the company”, he says, developing a stronger aftersales network oriented towards air transport customers, “growing up on the maintenance side” and “treating customers in a different way”. This may involve further moves to opening directly run company offices in certain regions, as Tecnam has already in the USA.

While another mooted project – a two-seat, single-engined concept called the P-Jet, disclosed at the AirVenture show in Oshkosh last year – is “not progressing”, Pascale says Tecnam has plenty on its plate with new variants of the P2012. “We will look at a VIP version, an amphibian, cargo and surveillance. We will probably introduce a stretch up to 14, 15 or even 19 seats. Maybe there will be a turboprop, a pressurised version,” he says. “What exactly we do will depend on the market, but what is clear is that the P2012 was needed by the market.”