Just ahead of the Paris air show, Rolls-Royce today completed a significant step in preparations for its next generation of commercial aircraft engines.

Tucked away in a Bristol production facility otherwise used for manufacturing and overhauling powerplants for a range of military applications – the Eurojet EJ200 for the Eurofighter Typhoon, for example – R-R’s engineers have quietly been putting the finishing touches to a new test engine.

Designated the Advance3, it combines the fan system from a 84,200lb-thrust (375kN) Trent XWB-84 with a modified low-pressure turbine (LPT) from an ex-test Trent 1000. With a ­brand-new core section and other components, it is designed to demonstrate a number of advanced technologies.

At the time of FlightGlobal’s visit on 8 June, the engine was still in its two main sections, both orientated vertically, as technicians added the final pieces of instrumentation. But, around a week later, the two halves were married together.

The complete powerplant will be sent to R-R’s Derby site in July, where it will be installed on one of the manufacturer’s extra-large engine test stands before it is started up for the first time later this year. That will kick off a series of increasingly intensive evaluations that will culminate in early 2018.

Although much recent focus has been on R-R’s new gearbox-equipped UltraFan engine, destined for service entry in the mid-2020s, the technologies being trialled in Advance3 are a crucial step in the transition away from its traditional three-spool design.

The most obvious difference between Trent-series powerplants and Advance3 is the change in architecture: it shrinks the intermediate-pressure (IP) compressor – to four stages – and the IP turbine, transferring more workload to the larger, 10-stage high-pressure (HP) compressor and two-stage HP turbine.

With that shift, plus the addition of a lean-burn combustor, comes the requirement to better manage the temperatures generated in the engine. And if that can be achieved without the need for additional compressor bleed-air cooling – or better yet, with a lower cooling need – then the efficiency of the engine improves.

Rival powerplant manufacturer GE Aviation has already introduced ceramic matrix composite (CMC) components into the hot section of the Leap engines it produces for the CFM International joint venture, but for R-R, ­Advance3 represents its first opportunity to use the lightweight, but heat-resistant material in a full-scale engine.

In the demonstrator, CMC components are used for seal sections. However, with those parts having been produced in R-R’s $30 million CMC facility in California – opened in 2016 – this is clearly just the start of their deployment: R-R anticipates expanding the use of CMC material into the second-stage HP turbine’s static components. And although the nozzle guide vanes in the first-stage HP turbine remain metallic, they are produced using R-R’s CastBond process.

Advance3 is also the first full-scale application of R-R’s lean-burn combustor technology, which features a twin fuel-­distribution system. Although it adds complexity through the need for a hugely sophisticated control and switching system – not to mention doubling the amount of pipework – the company is confident that it will deliver both improved fuel consumption and lower emissions of nitrous oxides.

Initial trials of the engine, and therefore the lean-burn technology, will be at sea level to analyse how the system deals with the switching mechanism and fuel recovery. “If we are happy we will take it to altitude and start to get in to some very sophisticated scheduling of fuel,” says Andy Geer, chief engineer and head of the Advance3 programme. 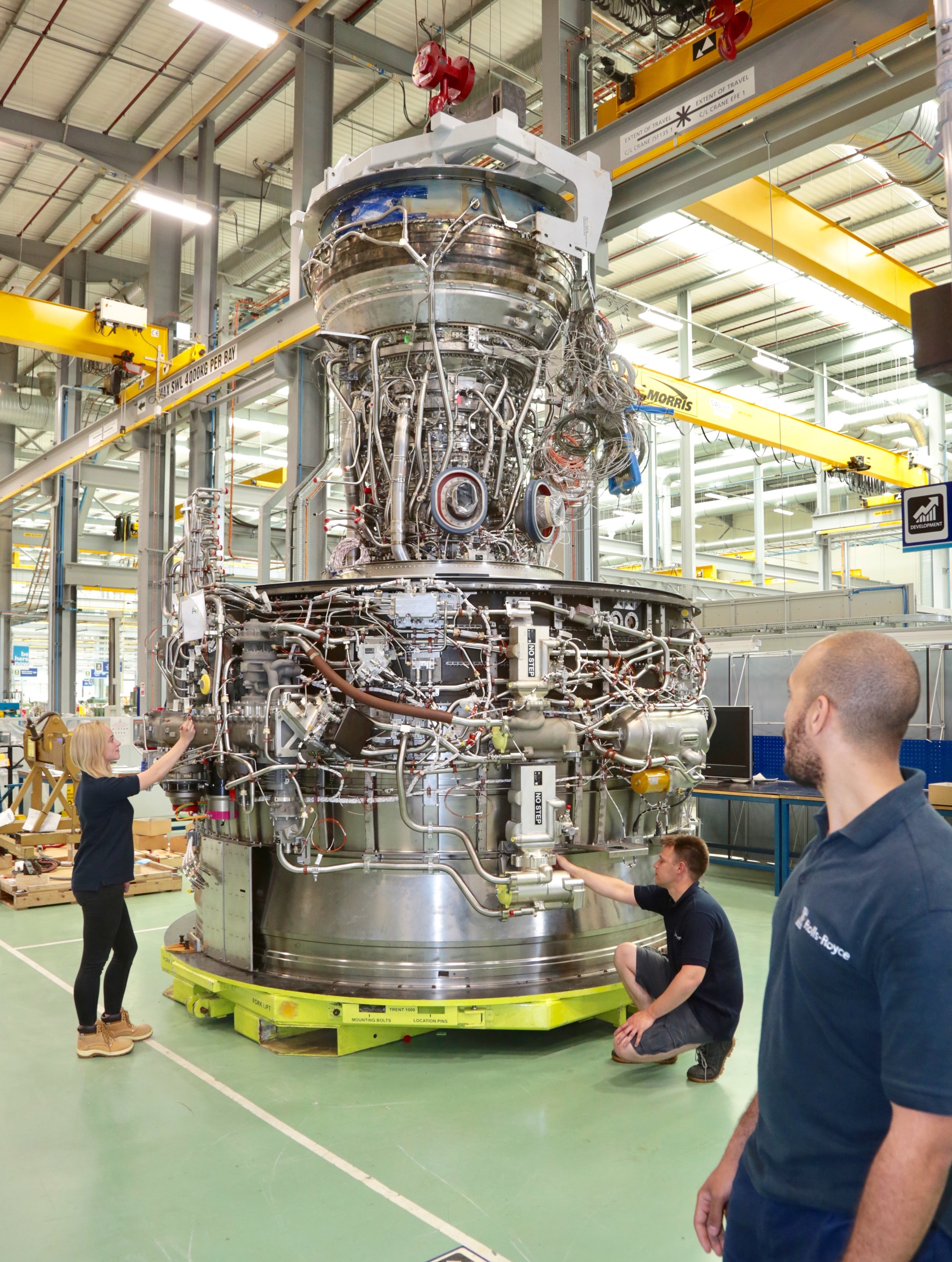 In addition, the system, which mixes the fuel and a much higher proportion of compressor delivery air at the combustion injection point, generates higher temperatures than a conventional rich-burn engine. “It presents a different thermal challenge to the turbine system immediately behind it,” notes Geer.

Although the new combustor is being trialled on Advance3, R-R is also building, in a bay immediately adjacent to that powerplant, a standalone test engine using another modified Trent 1000, for ground runs as part of its ALECSys – or advanced low emission combustion system – effort.

Tests of the ALECSys engine will start within weeks of the ­Advance3 trials and will allow more detailed measurements of the lean-burn system.

A sister powerplant, again using a modified Trent 1000 as a base, will follow six to 12 months later. This will be used for trials aboard the company’s Boeing 747-200 flying testbed.

Other technologies brought into the Advance3 engine include hybrid ceramic bearings – designed to cope with the higher operating temperatures – which are arranged in a new configuration to deal with loading changes when there is high power offtake during periods of lower thrust.

R-R has also increased the amount of variable geometry used in the engine, with variable vanes employed in a total of five ­compressor stages – four in the high-pressure section, and one in the intermediate.

Phil Curnock, R-R’s chief engineer for future programmes, points out that complex control systems have been used in engines for some time, but having the ability to “tune them up and down” makes the engine “more optimal” as it can react to the “constant changes” as “it moves around the flight envelope”.

Two further innovations were used in the production of the ­Advance3 demonstrator: one relatively complex, the other strangely simple.

The simplification is related to the supply chain for the powerplant: rather than troubling its already-stretched suppliers for the manufacture of one- or two-off components, it looked instead to other sectors – automotive, for example – to make the parts.

And inevitably, given its growing take-up across the industry, R-R has employed additive layer manufacturing (ALM) – also known as 3D printing – in a minor way on the engine, producing an air pipe via the method.

Geer says it would have been impossible to form the correct shape if the component was produced by another means. 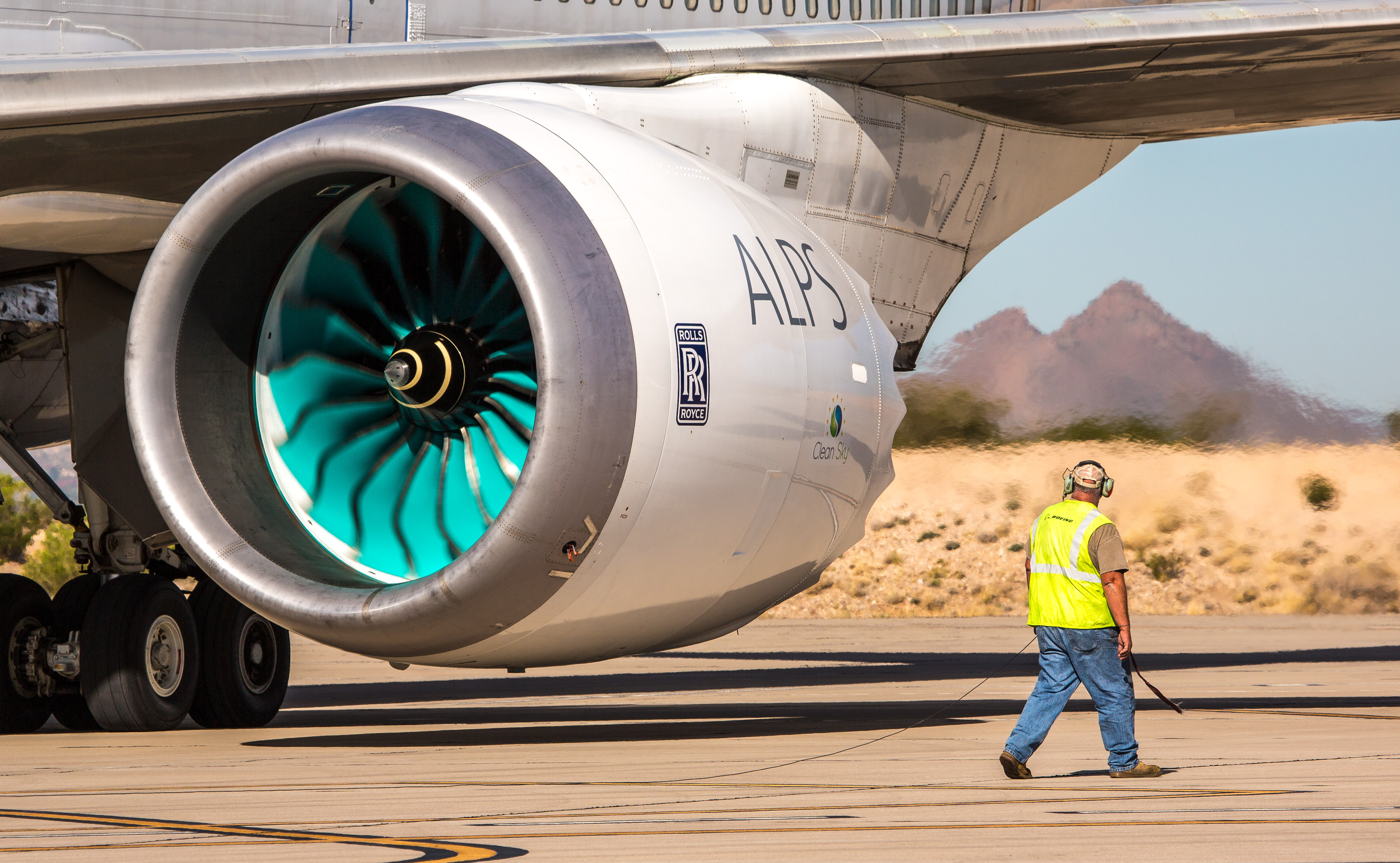 Curnock says R-R is still in the early stages of ALM development, with the process mainly used as a tool for rapid prototyping. “But eventually it will find its way into production parts as well,” he says, initially on the outside of the engine, “before we move up the temperature scale.”

Once transferred to Derby, the Advance3 engine will go into a “quite prolonged” period of test activity. Evaluations will include: bearing load measurement; water ingestion capability; a noise survey – “where the noise sources are and how to address them”; thermal surveys; a ­combustor rumble survey; and X-ray examination.

X-ray examination enables in-motion measurement of blade-tip and other key internal clearances and how the engine’s adaptive control system operates. “It is a sophisticated measurement, but allows us to verify our thermo-mechanical modelling,” says Geer.

But what Advance3 will not do, at this stage anyway, is fly. There is no need to do so, says Geer “unless it will tell you something that you can’t learn at sea level”.

Advance is not yet a product in its own right, but should an opportunity arise, it could make a commercial debut in the early part of the next decade. If that happens, then flight testing would be required.

Of course, the one potential opportunity is Boeing’s proposed new mid-sized aircraft, which the airframer increasingly seems committed to launching.

However, R-R responds to questions on this subject with a straight bat. “The architecture can run right across [the thrust range]. If there’s an opportunity in the first half of the 2020s that needs an engine in that thrust class, Advance is an opportunity,” says Curnock.

Aside from the technologies employed in the Advance3 engine, Rolls-Royce has a host of other research and development programmes under way.

The highest profile of these is undoubtedly the gearbox that will eventually be used on its ­UltraFan engine. Featuring a ratio of about 4:1, power tests of the component began in May 2017 at a specially constructed test rig in Dahlewitz, near Berlin.

An €84 million ($94 million) ­investment, the test facility – which also incorporates an attitude test rig – will enable R-R to put the gearbox through its paces, including the simulation of the kind of bending forces it would experience during take-off, for example.

“We can test those [effects] before we get anywhere near an engine,” says Curnock.

“We are really pleased with the results we are getting. We are building up the power we are ­putting through the gearbox and we have not found anything we didn’t expect,” he says.

With the growth of the fan in mind, R-R has been looking ­beyond its traditional hollow ­titanium fan blades in a bid to save weight.

“There is fantastic capability in the hollow titanium fan, but as it gets larger, composite wins on weight,” says Curnock.

Under its advanced low-pressure system programme, the manufacturer is looking at the adoption of composite fan blades with titanium leading edges. Extensive testing of the fan ­system, including flights, has been performed – less to assess its aerodynamic performance than to evaluate “how robust it is”, he says.

It is now at technology readiness level 5, and further analysis will take place later this year “to ­really understand the interaction”, between the fan and its case.

And due to begin assembly late next year is another demonstrator as part of its HT3 – high temperature turbine technology – initiative. This will be based on a Trent XWB-97 engine and will be used to trial advanced cooled metallic components, and ceramic matrix composite parts. 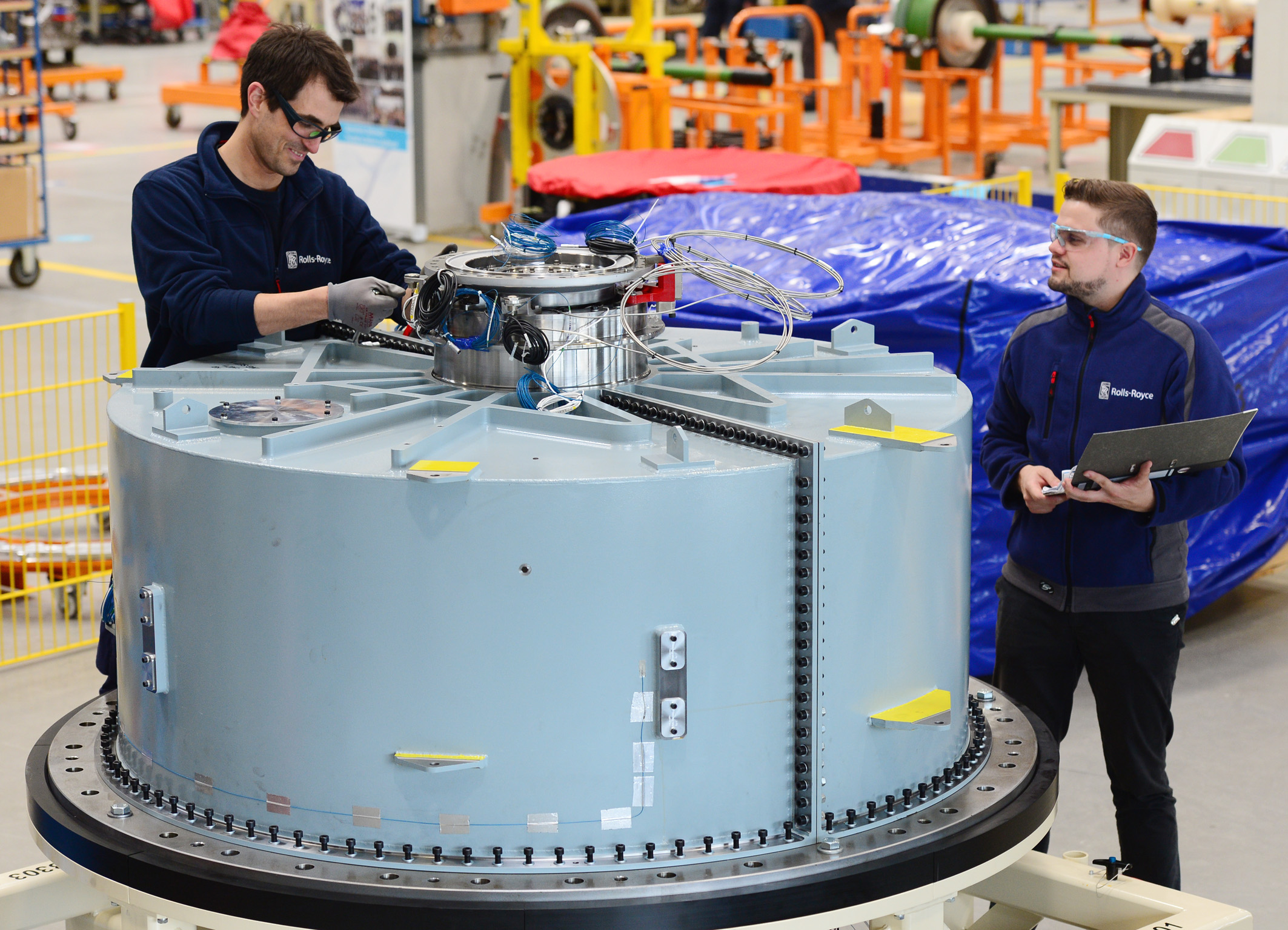