Nearly six years after a major restructuring, privately-owned US regional carrier Silver Airways is poised for its next major evolution, announcing a broad fleet overhaul and a new chief executive.

The Fort Lauderdale-based company also hinted in a media release at a possible business deal with Caribbean regional player Seaborne Airlines – part of an effort by Silver to become a "major US airline".

News of the changes follows months during which Silver's outgoing chief executive Sami Teittinen stressed that the airline was considering acquiring more-modern aircraft and expanding its network.

Silver announced on 1 August that it signed a letter of intent to acquire up to 50 ATR turboprops. The agreement includes a commitment by Silver to purchase 20 46-seat ATR 42-600s, and gives the company the option to convert orders to the larger 70-seat ATR 72-600.

Silver will use the ATRs to replace its fleet of 21 34-seat Saab 340Bs, which are all at least 19 years old, according to Flight Fleets Analyzer.

The carrier expects to receive up to four ATRs in the fourth quarter and all 20 by the first quarter of 2020, it says.

Silver also announces that on 7 August Steven Rossum will become chief executive, succeeding Teittinen, who is leaving the airline "for personal reasons".

Rossum most recently was chief executive and managing director of the aviation consulting business of US law firm Smith, Gambrell & Russell. He has also been Silver's outside general counsel and worked for the airline as a fleet transition advisor.

"Silver announced today that it has entered into negotiations with Seaborne Airlines to explore commercial cooperation, including potentially a combination in support of its long-term goal to become a major US airline," says Silver's media release.

"Seaborne’s experienced and dedicated employees, portfolio of markets, and business partnerships could help facilitate Silver’s route network’s expansion into a variety of highly attractive flight destinations," adds the release. "Further updates will be provided as the evaluation of Seaborne progresses."

Like Silver, Seaborne operates Saab 340Bs – it has eight of the type – as well as two Bombardier Dash 8-300s, Flight Fleets Analyzer shows.

Silver declines to provide additional comment about the changes to FlightGlobal, but the announcement continues a theme of expansion. 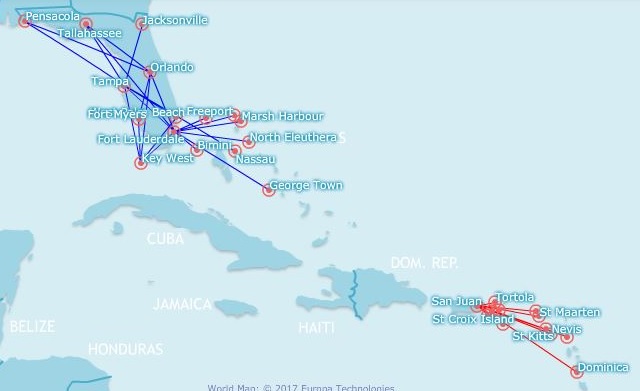 In the years that followed, the company expanded its network within Florida, signed new codeshare deals with major airline partners and opened a major new maintenance base at Orlando International airport.

Silver also in 2016 began what would become a nine-route expansion to Cuba, though it has since ended all Cuba routes due to competition and marketing and sales difficulties, Teittinen has said.

In September 2016, Versa purchased a controlling interest in Silver for an undisclosed price, a deal that Teittinen called a "recapitalisation" that would enable Silver to move forward with expansion.

Those aircraft would allow expansion beyond the Saab 340B's range, enabling Silver to serve new destinations farther south into the Caribbean and farther north into the USA, Teittinen said

A larger aircraft could also allow Silver to serve existing destinations without the weight and balance restrictions that force the Saabs to carry fewer passengers on some routes, he added.

"The range of the… Saab is not adequate enough," Teittinen said in March.

Saab 340Bs have a range of between 445nm (823km) and 470nm with a full payload, according to Saab documents. Silver's current network – operated all by Saabs – includes 10 cities in Florida and eight destinations in the Bahamas.

ATR 42-600s, by comparison, have a range of 801nm with a full load of 48 passengers, according to documents from ATR.

Cities north of Fort Lauderdale that fall within that range include Atlanta, Charleston, Charlotte, Nashville, New Orleans, and Raleigh-Durham. Heading south, ATR 42-600s could reach well beyond the Bahamas, to places like Providenciales in the Turks and Caicos Islands, Haiti and the Dominican Republic.

Seaborne's hub of San Juan, at 910nm from Fort Lauderdale, lies outside the ATR 42-600's fully-loaded range, but could be within the aircraft's reach at at less-than-maximum payload.

Seaborne has expanded significantly in the last decade at its San Juan hub, and will serve about a dozen destinations in December 2017, the start of the Caribbean's busy winter season, according to FlightMaps Analytics.

Meanwhile, capacity from San Juan suffered significantly since American Airlines in 2007 began dismantling its hub in that city. American had operated a substantial regional, inter-Caribbean operation from San Juan.

Capacity from San Juan to other Caribbean destinations hit 2.2 million seats in 2006, but slipped to 855,000 seats by 2014, according to FlightGlobal schedules.

That capacity has still not recovered to even half of the 2006 level, with projected capacity of just 984,000 seats in 2017, schedules show.