In the 10 years since it was established in a desert plot next to Al Ain airport, Strata Manufacturing has achieved a great deal. As well as being the Gulf’s only tier one aerospace manufacturer, with clients including Airbus, Boeing and Pilatus, the composite aerostructures specialist has spearheaded what some might call a cultural revolution in the sleepy oasis city.

In the 10 years since it was established in a desert plot next to Al Ain airport, Strata Manufacturing has achieved a great deal. As well as being the Gulf’s only tier one aerospace manufacturer, with clients including Airbus, Boeing and Pilatus, the composite aerostructures specialist has spearheaded what some might call a cultural revolution in the sleepy oasis city.

A decade ago, in conservative Al Ain, it would have been unusual for an Emirati woman to work outside the home, let alone follow a technical career or travel abroad without a male family companion. However, Strata chief executive Ismail Abdulla is proud of the fact that today around 52% of his 700 staff are female Emiratis, several in senior positions. More than half of Strata’s team leaders and supervisors are Emirati women. 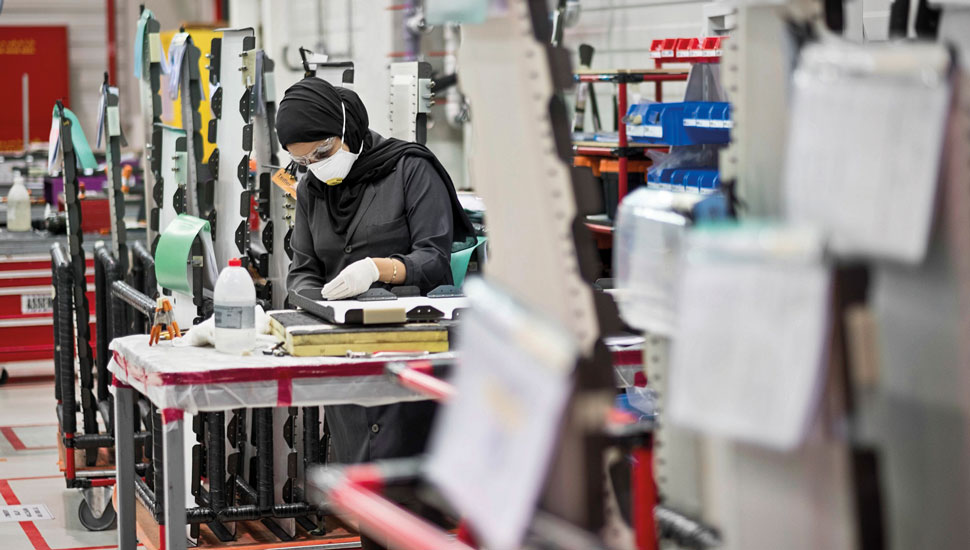 Equally impressive is that Strata has put the United Arab Emirates (UAE) on the map as a participant in – as well as a customer of – the global aerospace industry. Since the heyday of Gulf Air and emergence of Emirates in the 1990s, UAE airlines had been major consumers of Airbus, Boeing and other airframers’ products. But before Strata, the region contributed little or nothing to the supply chain, other than some MRO activity.

Strata, owned by Abu Dhabi state investment house Mubadala, began producing composite structures on a build-to-print basis in 2010. “We saw it as the material of the future,” explains Abdulla. A single production line, manufacturing Airbus A350 flap support fairings for Belgian firm SABCA, has grown to 13 programmes, and more announcements are promised at the Dubai air show. The company has graduated from secondary to primary structures, and, with more than 52,000 components delivered, Abdulla likes to say that 8% of the world’s in-service widebody fleet contains a part built in the UAE.

Strata focuses on wing and tail structures. “That’s how we differentiate,” says Abudula. The A350 – for which Strata also builds the inboard flaps on the -900 variant – is its biggest programme. The company also produces ailerons, flap track fairings and spoilers for the A350, as well as rudders and vertical fins for the ATR family, which is 50% owned by Airbus, through Italian aerostructures company Dema.

However, Strata has been widening its customer base, delivering, in January this year, the first shipset of belly fairings for the Pilatus PC-24 twin-engined light business jet after signing an agreement with the Swiss manufacturer in April 2018. It won its first piece of Boeing business in 2013, but two recent contracts have seen it increase its influence considerably with the US manufacturer.

In April 2018, Strata announced it would begin manufacturing composite empennage ribs for the 777X. That followed a deal signed at the 2016 Farnborough air show to build the 787’s vertical fin after Boeing’s decision to complement in-house production with an outside supplier. Strata is in the final stages of constructing a 4,000sq m (43,000sq ft) extension to its factory to accommodate the new line, which will “replicate the capabilities” of Boeing’s in-house assembly line in Salt Lake City.

Production will begin next year, with fins being shipped to Boeing’s final assembly plant in South Carolina. According to Abdulla, the contract – Strata’s biggest yet – represents “an important milestone for the company to position it for the next phase of growth”, and “the largest knowledge transfer from Boeing to any partner in the world”.

That is not the only building work under way at Al Ain. Next door, another, 8,500sq m factory, due to open next year, will house a joint venture between Mubadala and Belgian materials and chemicals company Solvay to produce carbonfibre for Boeing to use mainly on the 777X. The enterprise will become one of only a handful of manufacturers of pre-impregnated composites in the world. According to Khaled Al Qubaisi, chief executive of Mubadala’s aerospace, renewables and ICT business, the venture “fits perfectly with our growth strategy” by “focusing on high-tech manufacturing capabilities”.

It is part of an effort by Mubadala and Strata to “move upstream” through vertical integration, says Abdulla. “We want to capture as much of the value as possible.” While he rules out diversifying into metallic parts, one possibility is an acquisition or “framework agreement” with a manufacturer of metallic aerostructures. So too is the establishment of a painting facility, although Abdulla’s preferred route is through a partnership with a local supplier.

Because there are few such local suppliers in Al Ain – an inland city on the border with Oman traditionally known for its markets – one of Abdulla’s priorities is to attract investors to the airport. “We welcome anyone to Al Ain who wants to set up an activity that complements what we are doing, and we are working with [landlord] ADAC [Abu Dhabi Airports Company] to develop an ecosystem here,” he says.

The attractions of Al Ain include “excellent schools”, says Abdulla, and a lower cost of living than in the bustling coastal cities of Abu Dhabi and Dubai, each 90min away by road. While UAE nationals make up just over half of all employees, and nurturing a new generation of local talent has been one of Strata’s – and the UAE government’s – key strategies, recruiting talented expatriates and persuading them to move to Al Ain, has also been important. Its workforce of more than 700 is made up of 30 nationalities.

However, it is Strata’s role as a catalyst for creating a home-grown skills base and career paths for female Emiratis that might previously have settled for domesticity of which Abdulla is particularly proud. “We have been able to develop a pipeline of UAE nationals,” he says. “We are empowering technicians and engineers to take decisions on the production line. We always knew that the sustainability of this business would depend on UAE nationals.”

As Strata celebrates its 10th anniversary at the show, Abdulla says he is “really proud of our achievements in building credibility for the UAE”. He adds: “We have learned something new from every programme and ensured that we keep moving and don’t stay in our comfort zone. It’s been challenging. But we have navigated through the challenges.”