How Rolls-Royce is looking beyond the engine

UK engine manufacturer Rolls-Royce has three strands that guide its current development activities: the evolution of the gas turbine; research of “radical alternatives” such as electrification; and improving integration between the engine, airframe and its systems. On top of this, the company continues to support the development of alternative fuels.

R-R’s work in the first area is well known: a raft of research and technology programmes – Advance3, ALECSys and ALPS – will eventually culminate in the first flight of the next-generation UltraFan engine in the mid-2020s. Similarly, the manufacturer is involved in several high-profile initiatives, such as the recently announced Project Fresson, examining the possibilities presented by electrification. 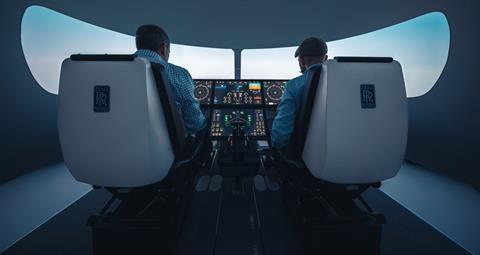 In fact, work in the first two areas is in many ways driving activity in the third. As Ash Owen, chief engineer, civil demonstrators and research and technology at R-R notes, an engine as large as UltraFan with its 3.6m (140in) fan diameter presents installation challenges.

Even if the UltraFan technology is scaled down to narrowbody size, the engine will still require better integration with the airframe. “We will have to do things differently, otherwise we will lose the [efficiency] benefits,” he says.

For example, in recent presentations, R-R has shown a rendering of the UltraFan engines mounted to a notional future widebody aircraft that features wings with a striking gull-wing profile to enable sufficient ground clearance.

R-R must, says Owen, work with the airframers “in an intelligent way” in order to fully “optimise” powerplant performance.

The need for greater integration – be that structural, aerodynamic or thermal – is clearest in the components surrounding the engine itself, the pylons, nacelles, inlets and so on.

But the consideration also extends to the cockpit and how pilots interact with the propulsion system. “We recognise that the interface between our product and the pilot is a key one, and one that we can help to optimise,” says Owen.

What it is about, says Peter Beecroft, systems architect at R-R, is understanding “what [information] pilots need in order to make better decisions”. That could be to improve on the current standard indicators of engine performance provided to pilots, or to provide better information to optimise the use of an engine to a particular mission.

Until recently, R-R had no means – and possibly little inclination – to do this: “The flightdeck was the airframer’s domain,” says Paul Harris, the engine manufacturer’s chief of technology – system design. “But now we are thinking about the best way of displaying that information for the pilots.”

That push into this new space has been considerably helped by the 2017 opening of a new facility at Cranfield University called the Aerospace Integration Research Centre (AIRC).

The facility is located adjacent to Cranfield’s runway and saw R-R and Airbus each invest £10 million ($13.4 million) towards the site’s total £35 million cost. Cranfield University added £5 million, with the balance from the (now disbanded) Higher Education Funding Council for England.

While there is close collaboration between the engine manufacturer and airframer, both have secure offices at the site to enable commercially sensitive research when required.

The most striking part of the AIRC is a central hangar space in which resides a wing, including the wingbox and engine pylon, from an Airbus A320, which R-R acquired from dismantling for a modest £30,000. 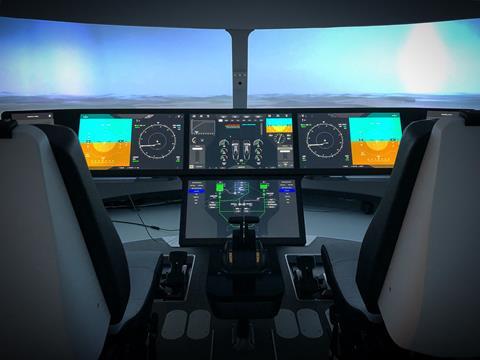 This is to allow R-R to better understand how the wing is designed from an engineering perspective, says Harris, and how it reacts when the engine – or at least ballast representing an International Aero Engines V2500 powerplant – is installed.

Data gathered from this exercise is allowing R-R to develop and validate models that can be used to predict engine behaviour on future applications.

It is, says Owen, about starting to think of the wing and engine as “a whole system” and then working to optimise it.

The concept of an engine as part of a wider whole extends to the fuel and thermal management systems too, rigs for which are contained in an adjacent building.

The fuel rig is representative of the fuel and oil system on a Trent XWB powerplant, but could be scaled up for an engine the size of UltraFan. Additionally, it can be used to understand how future synthetic fuels interact with the full system, says Owen.

But the fuel and thermal rigs do not exist in isolation: telemetry data is fed into the Future Systems Simulator inside the main building, allowing the test equipment to operate “in the loop”.

The flight simulator, while not a full-motion device, is sufficiently realistic and representative of a real cockpit to allow R-R to “fly” the structural models it has developed, says Beecroft.

The simulator is reconfigurable, to allow R-R to bring in different aircraft or propulsion systems, be they gas turbines, or hybrid/all-electric powertrains.

In addition, the flightdeck can similarly be modified, permitting experimentation with the human-machine interface – researching what information is displayed to the crew.

That is a topic made increasingly relevant as technology advances, says Owen. “If you have a distributed propulsion system, how do you show where the thrust is coming from if you have 20 motors?”