California-based Arcturus UAV has unveiled a new iterative development of its Jump 20 vertical take-off and landing unmanned air vehicle that it intends to pitch for a major US Department of Defense requirement.

The development – Jump 20C – boasts modifications over earlier versions including a wingspan extended by 30cm (1ft) and a maximum take-off weight of 95kg (210lb), up from 88kg. Payload and endurance are also increased, allowing a flight time of 10h with a payload of 15kg.

He says the C suffix indicates the all-composite aircraft is convertible to a standard catapult-launched model in around 5min.

During the conversion, the wings and booms supporting the four battery-powered rotors are removed and replaced with stronger wings better able to withstand the highergforces generated by catapult launch.

These offer the additional benefit of increasing payload by 18kg and boosting fuel capacity by 6kg, adding an extra 5h of endurance. 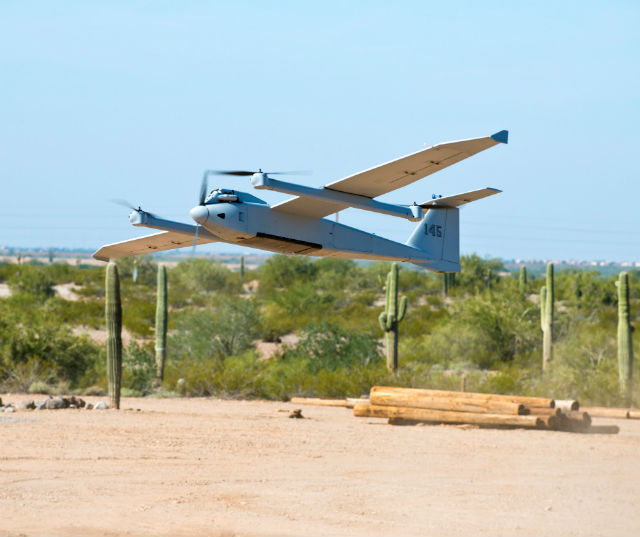 Arcturus integrated the Cloud Cap Technology TASE400LRS 10in gimballed turret as the primary payload on the Jump 20C, Hallerberg says.

The development of the new variant has taken around three months to complete “and is flight-tested and ready to go”, he says.

Hallerberg declines to name the branch of the DoD that issued the request for proposals, citing customer confidentiality.

However, on 6 April a solicitation notice was posted on the FedBizOps website for the procurement of unmanned systems services for the US Special Operations Command (SOCOM) under its Mid-Endurance Unmanned Aircraft System(s) III programme.

It is seeking contractors that can provide one of two UAV types – those designed to perform beyond-line-of-sight intelligence, surveillance and reconnaissance (ISR) missions and the other for line-of-sight ISR tasks.

Responses are due by 6 May, with shortlisted bidders required to perform flight tests in June.