Bahrain is to launch a major upgrade for its Lockheed Martin F-16 combat aircraft during 2014, as a decision is also expected on acquiring a new-generation type to bolster its capabilities.

Initial plans for the modernisation have already been agreed with Lockheed, and a contract signature is anticipated in June or July 2014, says Col Salah Al-Mansoor from the Royal Bahraini Air Force’s planning headquarters.

Improvements will include the addition of an active electronically scanned array (AESA) radar, new multi-function cockpit displays and a Link 16 datalink. A Lockheed Sniper targeting pod should also be added, along with weapons including Boeing JDAM and other precision-guided bombs, the D-model version of Raytheon’s AIM-120 AMRAAM and the same company’s AIM-9X Sidewinder air-to-air missile, says Al-Mansoor. 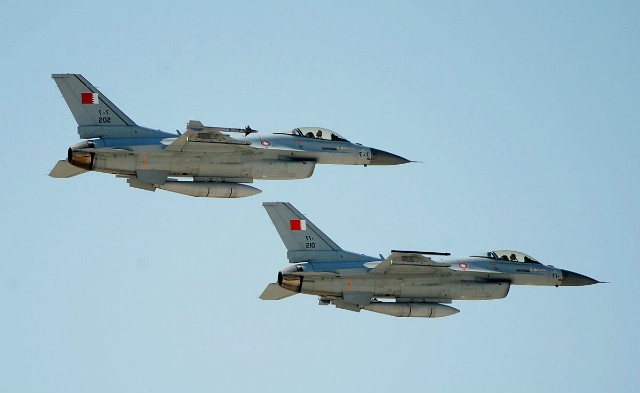 “We are looking for the upgrade to start in 2014, and to be complete by 2018,” he told IQPC’s International Fighter conference in London on 12 November. The first four modernised fighters are likely to be returned to service by late 2016 or early 2017, he adds.

The Common Capability Integration Programme upgrade is likely to use Lockheed’s M6.2 software standard as its baseline, Al-Mansoor says. An AESA system selection between Northrop Grumman’s Scalable Agile Beam Radar and the Raytheon Advanced Combat Radar has yet to be reached, he adds.

Bahrain’s air force currently flies 17 F-16C fighters and four D-version trainers, which Flightglobal’s MiliCAS database records as having been delivered in two batches between 1990 and 2002.

In addition to upgrading its current F-16s, Bahrain’s fleet modernisation plan also covers the selection of a new multirole combat aircraft, and the retirement of its last Northrop F-5 interceptors later this decade.

The Eurofighter Typhoon is the clear frontrunner for the former requirement, with an order to potentially be finalised at the Bahrain international air show, which will be staged from 16-18 January 2014. Another possible solution would be the Dassault Rafale, or, longer-term, Lockheed’s F-35 Joint Strike Fighter.

Al-Mansoor reveals that the Gulf Cooperation Council state is also considering the possibility of ordering a follow-on batch of advanced-model F-16s, as well as a new type. A decision is expected during 2014, he says, noting: “We must analyse and determine the cost of the future force structure.”