Boeing has passed the critical design review (CDR) milestone on the 787-10 programme, a key step in the timeline of a development programme.

By clearing the CDR in late June, Boeing’s development team “validates priorities and progress to ensure that the design will meet all requirements when engineering is released to production,” Boeing tells Flightglobal.

The CDR precedes both the critical programme review – also known as Gate 8 – and the 90% design release milestone, when engineering drawings are turned over to the production staff and supply chain. Those groups, in turn, start building components for the first test aircraft.

So far, the 787-10 development has stayed on track. Boeing cleared the CDR milestone for the smaller 787-9 in September 2011, or almost three years before the type entered service in July 2014. The 787-10 is scheduled to enter service in roughly three years in 2018.

“We’re pleased with our progress on the 787-10, which continues on track toward 90% design release before year-end and first delivery in 2018,” Boeing says. 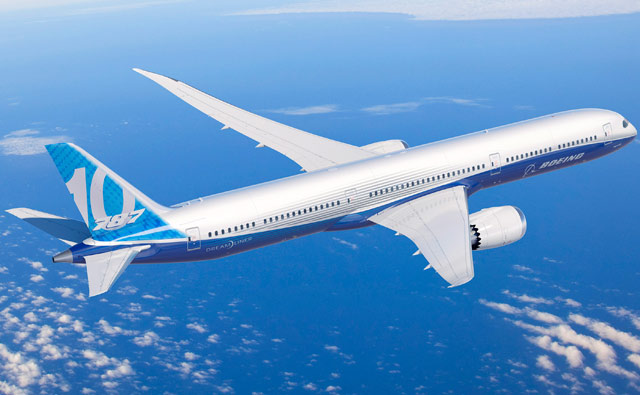 In June, Boeing vice-president for aircraft development Scott Fancher said the 787-10 also was meeting another key goal of the development programme, which is to maintain as much commonality as possible with the 787-9.

The first stretch of the original 787-8 model needed to incorporate many minor changes to improve reliability and performance, including the addition of a hybrid laminar flow control (HLFC) system in the leading edge of the vertical tail.

But Boeing hopes to maximise the earnings potential of the 787-10 by reusing the same systems and structures as the 787-9, and just adding length.

Although longer by 5.5m (17ft 1in), the 787-10 maintains the 251,000kg (553,000lb) maximum takeoff weight of the Block B version of the 787-9. Adding length often requires aircraft designers to increase the size of the aft-mounted horizontal stabilisers, but Boeing is using software adjustments to preserve the 787-9 stabiliser design for the 787-10.

Boeing launched the 787-10 at the Paris air show in 2013, but the order backlog has remained stuck at around 140 aircraft. Although Boeing vice-president for marketing Randy Tinseth predicted in March that 2015 would be the “year of the 787-10”, Boeing has added only three orders to the backlog with a conversion by All Nippon Airways.

Tinseth later clarified that orders for the 787-10 will likely grow as deliveries become more imminent and airlines choose whether to convert orders from smaller 787 models.