US Army trains on JLENS ahead of first deployment

In anticipation of its first planned deployment at the end of the year, the first 44 operators of the US Army’s aerostat-based radar surveillance system have been certificated to operate and maintain the system.

Raytheon's joint land attack cruise missile defence elevated netted sensor (JLENS) system – which consists of two aerostats: one with a fire control radar and one with a surveillance radar – will be deployed at the Aberdeen Proving Grounds in Maryland in 2014, marking its first operational deployment.

The tethered aerostats will sit at some 10,000ft. They can survey an area of some 340 miles (550km), so will be able to monitor the National Capital Region (NCR) – that includes Washington, DC – keeping watch for unmanned air vehicles, cruise missiles, ballistic missiles and rockets. 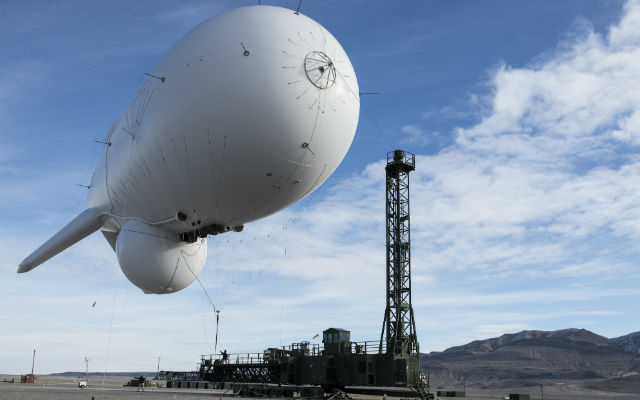 Under the instruction of the US Northern Command (NORTHCOM), the army’s A Battery, 3rd Air Defence Artillery, will operate the system when it is deployed later this year. One JLENS orbit takes six people to inhaul/exhaul the system, and a team of three to four to operate.

“The construction of the site is on-going at Aberdeen Proving Grounds,” says Doug Burgess, Raytheon’s JLENS programme manager. He adds that the surveillance radar on its aerostat will be the first to deploy, followed by the fire control radar-mounted aerostat some months later.

Burgess explains that the operation of JLENS to monitor the NCR comes under a three-year exercise being run by the government and NORTHCOM, and that another team will begin training on it in “a month or so”.

Two aerostats with the two radar types and ground control equipment constitutes one JLENS orbit. Two orbits have been developed under the JLENS programme, and the other is due to enter “strategic reserve”, which will mean that it is maintained ready to be deployed, should it be required.

“There has been some interest from the international market,” Burgess claims. “But it will take some time for these to go forward… they are interested in seeing it deployed.”