Accident investigators have made a series of recommendations to UK and European regulators, after being unable to fully determine why an Airbus Helicopters EC135T2+, which had been supporting Police Scotland operations over Glasgow on 19 November 2013, experienced dual engine flame-outs and crashed, killing 10 people.

The night-time incident had previously been attributed to fuel starvation, but a new report says no answers have been found to explain why the aircraft’s pilot had switched off reserve pumps earlier in the flight and also failed to land as required, after acknowledging repeated low fuel warnings. “The helicopter did not land within the 10-minute period specified in the Pilot’s Checklist Emergency and Malfunction Procedures, following continuous activation of the low fuel warnings,” the UK Air Accidents Investigation Branch (AAIB) says in a 176-page report published on 23 October.

Owned and operated by Bond Air Services, the aircraft – G-SPAO – was on its way back to Glasgow City Heliport, but came down in a built-up area some 2.7nm (5km) away from its intended destination. “Both engines flamed out due to fuel starvation, about 32 seconds apart,” the report says. The aircraft crashed onto and through the roof of the Clutha Vaults public house, killing its civilian pilot, two onboard police observers and seven civilians, and seriously injured 11 others. 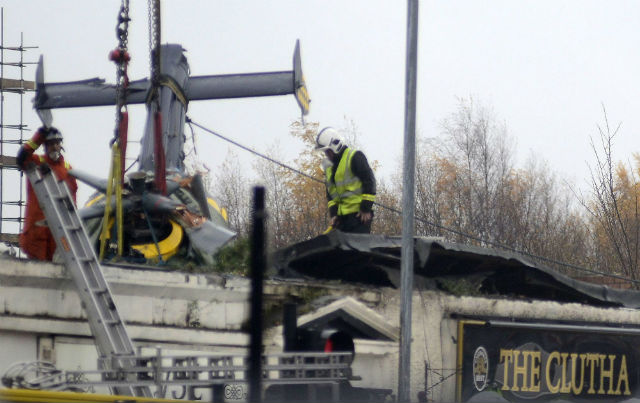 “Despite extensive analysis of the limited evidence available, it was not possible to determine why both fuel transfer pumps in the main tank remained off during the latter part of the flight, why the helicopter did not land within the time specified following activation of the low fuel warnings and why a Mayday call was not received from the pilot,” the report states.

“Also, it was not possible to establish why a more successful autorotation and landing was not achieved, albeit in particularly demanding circumstances.” The aircraft’s radar altimeter and landing light were left unpowered following the loss of the second engine, which the AAIB cites as a contributory factor, due to “a loss of height information and reduced visual cues”. It notes that “the transmission system, main rotor blades and Fenestron were not being driven and were not rotating at the point of impact.”

According to the investigation, “no significant pre-impact technical defect was identified in any part of the aircraft or its systems”. During a subsequent strip-down and assessment, “neither [Turbomeca Arrius 2B2] engine showed any evidence of pre-accident damage, fault or failure”, and no fuel contamination was found. The aircraft had taken off with about 400kg (880lb) of fuel, and 73kg of usable fuel remained on board, due to the transfer pumps having been switched off.

Referring to the challenges faced in obtaining flight information following the crash, the AAIB says: “It is recommended that the [UK] Civil Aviation Authority requires all helicopters operating under a Police Air Operators Certificate, and first issued with an individual Certificate of Airworthiness before 1 January 2018, to be equipped with a recording capability that captures data, audio and images in crash‑survivable memory.” It is also calling for the integration of flight data recorders on such aircraft, and for EASA to require the same enhancements for those helicopters used by emergency medical services organisations.

“Airbus Helicopters has reviewed the report, which highlights there were no technical factors linked to this tragic accident,” the airframer says. It notes that it has “worked tirelessly to provide the authorities with all information and support required”, and says it will now “review this report in detail and take into account all recommendations”.

The company “will continue to work tirelessly to ensure the safety of our aircraft”, it adds.

Speaking to Flight International, Airbus Helicopters’ global head of safety, Gilles Bruniaux, highlighted the manufacturer’s decision to install as standard equipment the Vision 1000 system into the cockpit of all its commercial rotorcraft ordered since the start of 2014 as a “proactive measure”. The equipment records cockpit imagery and voice activity during operations, along with certain flight parameters.

Bruniaux says the company is also looking at potential future enhancements for its range, such as the possibility of automating the system used to transfer fuel from reserve tanks, so that the process would require “no action for the pilots”.

Bond Air Services notes that while the AAIB has made no specific recommendations for the operator, it is “studying the report and will continue to work with others, including the manufacturer and regulators, to learn from its findings”.