The final report into the fatal crash of a Trigana Air ATR 42-300 in 2015 has highlighted crew, equipment, and organisational issues.

The disaster occurred when the aircraft (PT-YRN) flew into Tanggo Mountain at an elevation of 8,300ft on 16 August 2015, killing all 49 passengers and five crew on board.

The aircraft was operating a Sentani-Oksibil service in the Indonesian province of Papua, and Oksibil was experiencing cloudy conditions the day of the crash.

In its final report, Indonesia's National Transportation Safety Committee (NTSC) highlighted two direct contributory factors: deviation from visual approach guidance and visual flight rules without regard to the weather and terrain; and the absence of enhanced ground proximity warning system (EGPWS) alerts. A factor underlining both immediate causes was the safety culture at the airline.

The report's findings were based purely on the cockpit voice recorder (CVR) as the flight data recorder was damaged in the crash and had a long and problematic maintenance history. Neither Indonesian nor French officials were able to glean useful data from the device.

Complacency may have played a role in the crash. The crew had already conducted a service on the same route that day when they had flown directly to a base leg to runway 11. The CVR indicated that a similar approach was planned before the crash, although weather conditions had apparently deteriorated between the two flights.

"The approach briefing should consist of minimum safe altitudes, and type of the approach, furthermore the pilot should maintain visual and special emphases must be placed on the familiarity with terrain," says the report. "The CVR did not record an approach crew briefing or specific discussions concerning to the minimum safe altitude and existing weather conditions."

Ordinarily, an EGPWS alert would have sounded, but none were picked up on the CVR. The report disclosed that Trigana's ATR pilots, including the captain of the aircraft in question, had a custom of pulling the circuit breaker for this system to deactivate "nuisance warnings."

"The investigation concludes that, most probably, the EGPWS power supply circuit breaker was pulled during the accident flight and the two previous flights, explaining the absence of altitude call out during the two previous approaches and warning prior to the impact." 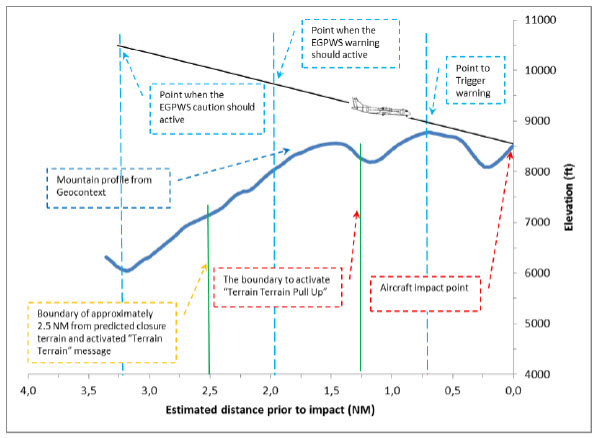 Assuming the EPGWS circuit breaker not been pulled, the NTSC raised doubts about whether it would have prevented the crash. It notes that its database might not have been up-to-date with the topography around Oksibil, and raised doubts that it was even connected to the aircraft's GPS system.

Trigana's poor organisation oversight also came in for review. In addition to failing to remedy routine deviations by Trigana crews landing at Oksibil, there were problems with the carrier's maintenance of components and systems, and its documentation of maintenance work.

Following the disaster, Trigana informed the NTSC of 20 actions it had taken to improve safety. These included better pilot training and oversight, improved documentation procedures, and improved maintenance of key components.