Italy has been cleared by the US Department of State to acquire mission equipment to equip a pair of Gulfstream G550 business jets for a variety of intelligence and reconnaissance missions.

Detailed in a 15 December congressional notification, the acquisition is valued at $500 million and will be delivered chiefly by L3Harris. 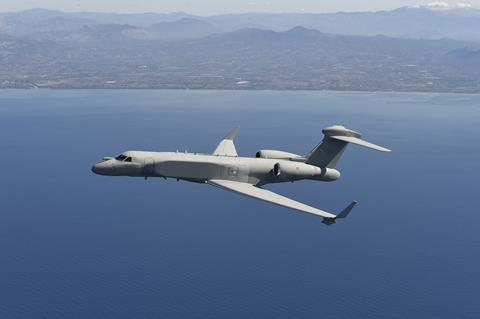 The airborne intelligence, surveillance, reconnaissance and electronic warfare mission systems will be installed on two G550s that will be supplied by the Italian defence ministry, the notification says.

Also covered by the deal are training and support services, and flight-test and certification activities.

In October, Rome indicated that it was to develop a “multi-mission and multi-sensor” C4ISTAR aircraft based on the G550, with an initial multi-year funding commitment of €1.2 billion ($1.46 billion) over the 2023-2025 period.

The Italian air force already operates a pair of modified G550s in the airborne early warning (AEW) role, with these supplied by Israel Aerospace Industries.