Delta Air Lines plans to shrink the business class cabin on its Boeing 777-200 aircraft when it installs new suites in the coming years.

"Delta regularly evaluates optimal cabin configurations that reflect demand for premium seating and customer comfort," a spokeswoman for Delta says. "With the addition of Delta premium select [premium economy] on the 777, we have provided even more premium seating options for our customers onboard."

The airline will continue to offer nine-abreast seating in economy, she adds.

Competitors American Airlines and United Airlines, as well as many foreign carriers, have moved to 10-abreast seating in economy on 777 aircraft.

Delta needs approval from the regulator to install the suites, which will have partitions that can be closed during flight to provide "additional comfort, convenience, personal space" to passengers. 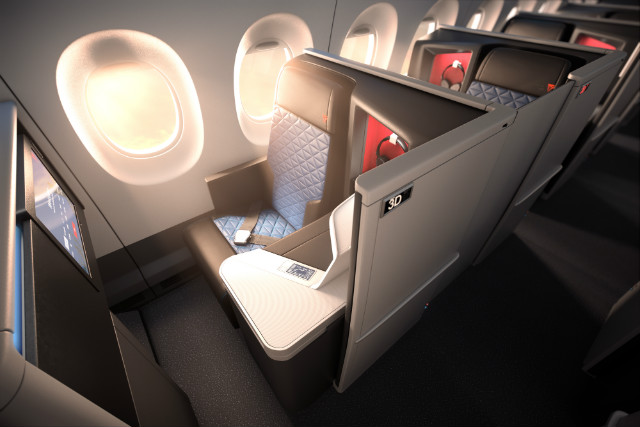 FAA regulations bar airlines from having any barriers between passenger seats and the aisle during takeoff and landing. However, numerous exemptions have been issued to carriers, including Delta for the Airbus A350-900, that have installed suites as their premium product onboard aircraft.

Delta will debut the suites on the A350 in the fourth quarter. The aircraft will have 306 seats, including 32 suites in business, 48 in premium economy and 226 in economy.

The A350s will initially fly from the carrier's Detroit hub on routes to Asia.

Delta will reconfigure its 777s with 296 seats when it installs the suites, the filing shows. In addition to 28 seats in business class, it will have 48 in premium economy and 220 in economy.

Delta has not disclosed an installation timeline for the 777s, however, executives have previously said that the fleet is the first scheduled for retrofits after the introduction of the A350s.