Accident investigators have pinpointed the cause of a fatal accident involving an Airbus A400M tactical transport in Seville, Spain on 9 May as a loss of power to three of its four Europrop International TP400-D6 engines.

Airbus Defence & Space on 2 June communicated the findings of the Spanish defence ministry’s CITAAM organisation to operators of the A400M. This followed the completion of preliminary analysis of the aircraft’s digital flight data recorder and cockpit voice recorder.

“CITAAM confirmed that engines 1, 2 and 3 experienced power frozen after lift-off and did not respond to the crew’s attempts to control the power setting in the normal way, whilst engine 4 responded to throttle demands,” Airbus says.

With the three affected engines still operating at take-off settings, the Airbus test pilots aboard aircraft MSN23 opted to move their power levers to the “flight idle” position to reduce power. “The power reduced, but then remained at flight idle for the reminder of the flight, despite attempts by the crew to regain power,” the company says.

The crew attempted to make an emergency landing near Seville airport around 15min into the flight, but local reports suggest that the aircraft struck powerlines before crashing. Four of the six-strong crew were killed in the accident, while the other two were seriously injured. 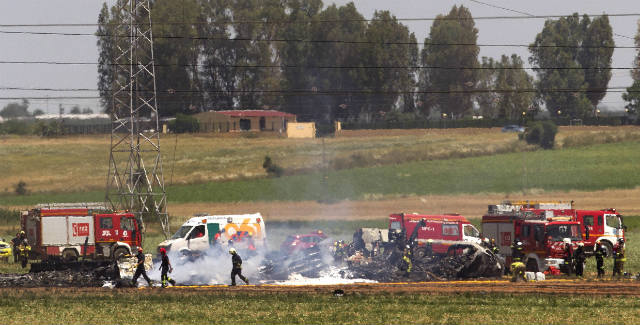 “Preliminary analyses have shown that all other aircraft systems performed normally, and did not identify any other abnormalities throughout the flight,” Airbus confirms.

The company’s accident information transmission follows an alert issued to its customers on 19 May, which recommended that precautionary checks should be made on the electronic control units for each TP400 prior to resuming flight operations with the Atlas.

With information from the aircraft’s data recorders now available, the company says it “does not have any additional specific recommendations beyond those specified [last month]”.

France, Germany, Malaysia, Turkey and the UK have so far taken delivery of the type. The French air force is conducting limited operations with its six-aircraft fleet, but the UK has not flown its examples since the accident.