After dominating the medium-lift military tactical market for decades, the company's turboprop C-130J Hercules, upon which the LM-100J is based, is facing new competition from Embraer's KC-390 turbofan transport. In response, Lockheed Martin's Hercules is flexing its muscles and showing off its strengths.

"At the Farnborough air show, one of the key highlights we wanted to do with the demonstration was to show its manoeuvrability," says Tony Frese, Lockheed Martin’s vice-president of business development for air mobility & maritime missions. "That manoeuvrability, that responsiveness, pays off at the tactical role."

Lockheed Martin might have good reason to feel uneasy about the C-130J's position in the tactical airlift market. Just weeks before Farnborough, on 5 July 2018, Embraer announced that it intended to market and sell its KC-390 through a joint venture with Boeing. Embraer also plans to use the American company's leverage over suppliers to cut the cost of parts and components.

However, it's Lockheed Martin's market to lose. Some 21% of military transports in operation at the beginning of 2019 were Lockheed Martin C-130/ L-100s, according to FlightGlobal's World Air Forces Directory. The next closest competitors, the Beechcraft King Air and Airbus C295/CN235 families, each held just 7% of the world fleet.

Embraer's KC-390 wouldn’t be the first aircraft to try to knock off the Hercules.

"The C-130 has always been there. People have been afraid to challenge it. People have tried to nibble away at it and gotten beaten down," says Richard Aboulafia, vice-president of analysis at Teal Group. "The [Alenia] C-27J experience was probably as close as we've seen an attempt... The C-27J was put out there as effectively a half-sized C-130J. The problem was it was two-thirds of the price."

In fact, the military transportation market could shrink in the coming years. Teal Group projects that the market will reduce by some 42% to $3.62 billion by 2027. Total units produced across the market are projected to fall about 24% to 56 annually.

Compared with the hundreds of fighters and helicopters that roll off assembly lines each year, the military transport market is not big. Nonetheless, Embraer is determined to get a piece of it. The South American firm may have a chance.

"You are getting a lot of cargo box for the money. It's a lot of lift and a lot of box," says Aboulafia. "It's probably the best single design in its class." 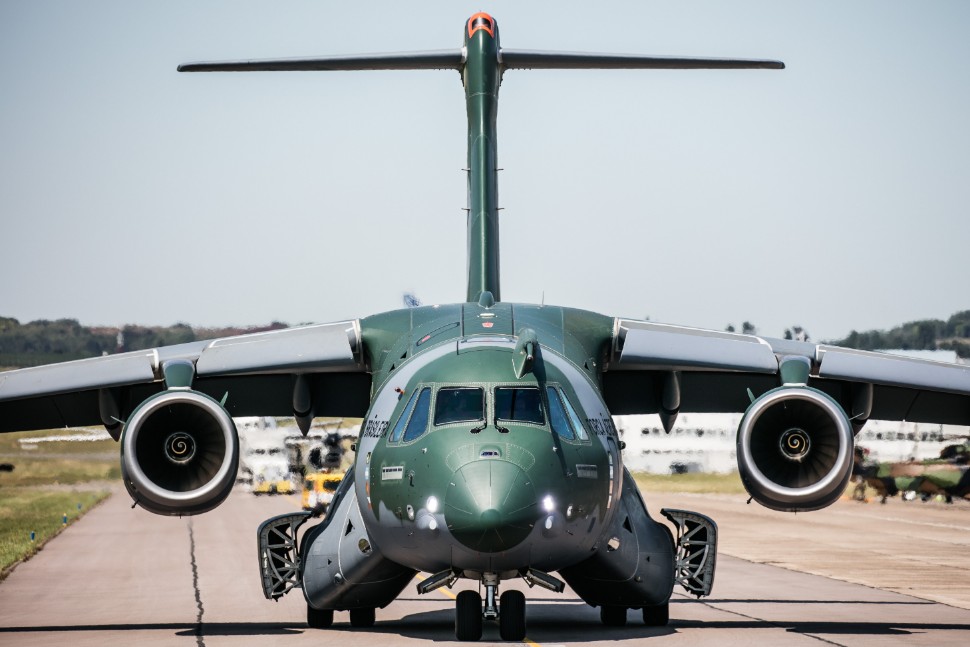 Medium-lift transports are tasked with carrying out a wide variety of missions, including troop transport, medical evacuation, cargo air drop, fire retardant air drop, paratrooper air drop, aerial refuelling, maritime patrol, and search and rescue. The C-130 has also been modified to fill several niche roles as an intelligence, surveillance and reconnaissance aircraft, a gunship and an electronic warfare platform.

To serve that smorgasbord of tactical transport uses, Embraer has deviated from the typical turboprop design that dominates the market. Instead, the KC-390 has a high, swept wing and two IAE V2500-E5 turbofan engines. With that design, it cruises at a speed of about 470kt true airspeed (870km/h) and at an operational ceiling of 36,000ft.

Embraer says that design makes the KC-390 the most efficient on the market.

"Because of the speed of the airplane and load capacity we can complete a mission with fewer aircraft than the competition," says Walter Pinto Junior, vice-president KC-390 programme. "We fly faster so we can complete the mission faster."

The KC-390 also comes with the lowest life cycle cost in the medium airlift market, claims Embraer. Much of that comes from systems and know-how integrated into the tactical transport from the Brazilian manufacturer’s commercial airline business, such as the V2500-E5 engine from IAE and the Pro Line Fusion Avionics System from Collins Aerospace.

For its part, Lockheed Martin doesn’t contest the advantages of the KC-390's speed and altitude. Rather, the company argues those capabilities are irrelevant. The American firm says that most customers want a tactical aircraft that can fly low, slow and heavy – characteristics it claims demand a turboprop.

"There are just the physics behind the mission that really drive you to a four-engine, turboprop, straight-wing aircraft," says Frese. The C-130 first flew in 1954 and is the longest running production military aircraft in the world. Frese argues that old design is a strength, not a weakness.

"People ask me, if you designed an aircraft in 2019 that was a tactical airlifter, what would it look like?" he says. "I tell them it would look a lot like a C-130."

Chief among those advantages is the turboprop, he says.

"The advantage of a turboprop on a C-130 is that it's a constant speed engine. You are just changing the pitch of the propeller in order to get more thrust," says Frese. "So that pitch could be changed very rapidly."

He says a turbofan – such as the KC-390's engines – can’t keep up due to the extra time it takes to increase its revolutions per minute. For instance, those capabilities are needed for getting out of tight spaces while air dropping fire retardant or cargo, or quickly fleeing enemy ground fire.

Embraer counters that the KC-390 is more than capable at low speeds, thanks to its nimble fly-by-wire system and control surfaces, such as its spoilers.

"We can perform in-flight refuelling for helicopters," says Pinto. "So we need to fly very slow, like 120kt, for these missions."

Lockheed Martin hits back again, saying that a turbine could be easily damaged on a rough landing strip if foreign object debris is sucked into its compressor. For its part, Embraer says that is irrelevant because of the high position of its turbines on its wing. In turn, it criticises Lockheed Martin's turboprop configuration by saying that the modern six-blade composite propellers found on the C-130J are expensive to replace if damaged.

When it comes to the maintainability of its engines, Embraer may have a point, says Douglas Royce, an analyst with Forecast International.

"My expectation would be that having to maintain what are essentially two commercial jet engines versus four turboprop engines is going to be cheaper," he says. "You may give up some level of operational flexibility. But if you don't find your air force constantly landing in rough strips you may be able to work around that."

That point might be moot with US Special Operations Command (SOCOM), which seems to prefer turboprops for their ruggedness. SOCOM is one of the world's largest buyers of tactical transports and could attest to the KC-390's value to foreign buyers, says Aboulafia.

"There's always been that mantra, 'SOCOM is the thin edge of the wedge. They’ll buy six or a dozen of everything!'" he says. "But the problem is looking at their buying habits – and every special operation air arm's buying habits – they are not enamoured of huge iron Hoovers under a wing."

Also, adds Royce, the US military uses the C-130J in harsh environments.

"The US uses the C-130 as a real battlefield truck that can land in hot conditions," he says. "It's a very rough, very rugged aircraft. Very versatile."

Facing possible scepticism from SOCOM, Embraer's best bet for the KC-390 might be to move or duplicate part of the transport production line to the USA to take advantage of the US Department of Defense's (DoD) Foreign Military Sales (FMS) programme.

Embraer says it's too early to say if it will add production facilities in the USA, though it had some success rebranding its light attack Super Tucano aircraft as the A-29 and adding production in Jacksonville, Florida in partnership with Sierra Nevada. The A-29 has sold via FMS to countries including Afghanistan, Lebanon and Nigeria.

The company could try to repeat the Super Tucano strategy with the KC-390, says Aboulafia.

"Whatever upside there is in a limited market you take advantage of it with FMS," he says. "In other words, you make the most of it."

Embraer's biggest KC-390 customer is the Brazilian air force, which has placed 27 firm orders for the transport, according to Cirium's Fleets Analyzer. The service is likely to receive its first production aircraft before July 2019. There are also 38 letters of intent to order the aircraft from international customers, including six LOIs from Argentina, six from Chile, 12 from Colombia, two from the Czech Republic, six from Portugal, and six from Lisbon-based aviation services firm SkyTech, according to Fleets Analyzer.

Embraer may find more ways to firm up orders and expand its backlog with the weight of Boeing behind the programme, says Royce.

"Boeing now has a strategy, which we've seen in several different programmes, of being very aggressive on pricing on the forward end," he says. "And then, they have a 20 to 30-year, if not longer, ability to generate money through all the maintenance services and upgrade services that will be provided over the lifecycle of the aircraft."

Ultimately, expectations should be moderated by the small size of the tactical airlift market, says Aboulafia.

"We will see how many other letters of intent they can convert. That’s a big challenge. It’s certainly an easier challenge with Boeing," he says. "If they can get one [aircraft] a month [produced] and succeed with Boeing's help, then that’s not an unhappy ending." 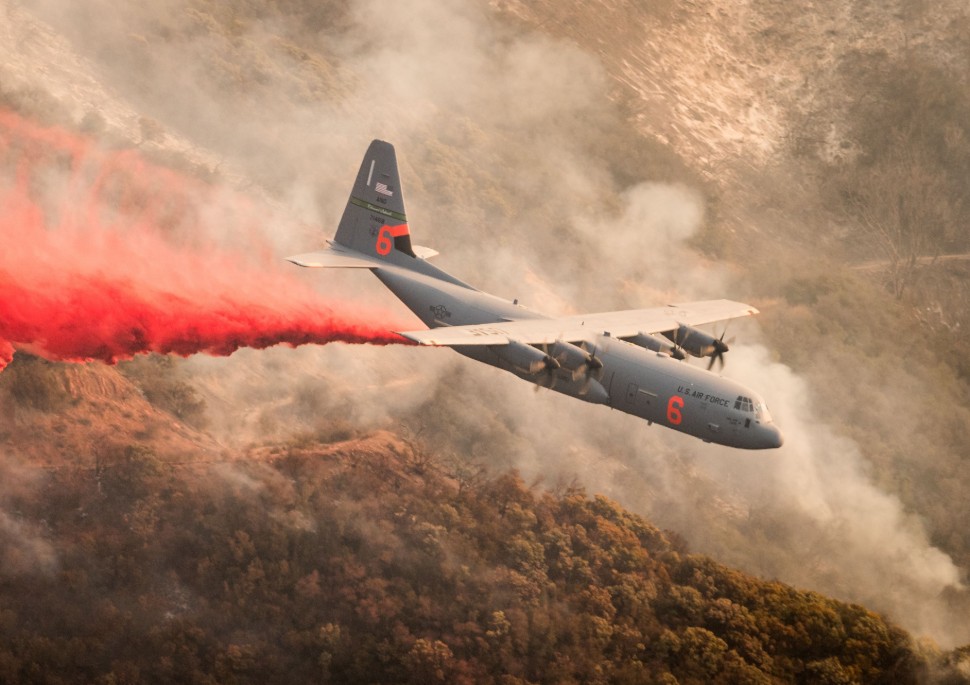