Middle Eastern carrier Emirates has revised its previous tentative agreement for Boeing 787s, opting to take 30 of the 787-9 variant rather than the larger 787-10.

Middle Eastern carrier Emirates has revised its previous tentative agreement for Boeing 787s, opting to take 30 of the 787-9 variant rather than the larger 787-10.

Deliveries of the aircraft, worth $8.8 billion, will commence in May 2023 and continue for five years.

The Dubai-based airline had originally indicated, two years ago, that it would order 40 787-10s to be taken from 2022. But the deal was not subsequently firmed and no engine selection was made. 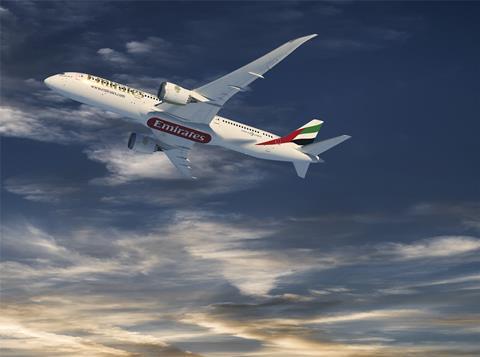 Emirates chairman Sheikh Ahmed bin Saeed Al Maktoum also stated that its agreement for the 777X would be cut back to 126 aircraft from the previous figure of 150.

But Emirates states that the rejigged deal involved its exercising a “right to substitute” the 777X for 787s, under an agreement with the US airframer.

Al Maktoum says the revised Boeing deal “solidifies” the carrier’s plans to operate both the 777X and the 787.

“This is an important investment and addition to our future fleet and network requirements, providing us the agility, flexibility and spread of seat segments when it comes to overall capacity to serve a range of destinations,” he adds.

Emirates had already similarly restructured – for the second time – a large Airbus fleet deal, having signed for 50 A350-900s at the show. This replaced an earlier provisional agreement for 30 A350s and 40 A330neos which, in turn, succeeded an order for A380s.

While the A350s are exclusively powered by Rolls-Royce Trent XWB engines, no powerplant selection has been made for the 787s. But a straight swap of General Electric-powered 777s for 787s might suggest that the 787-9s will ultimately be equipped with General Electric GEnx engines.