Revealed at the ILA Berlin air show, the European MALE RPAS has the backing of airframers Airbus Defence & Space, Dassault and Leonardo, along with multiple system suppliers. The twin-turboprop design is the result of a four-nation definition phase study backed by the governments of France, Germany, Italy and Spain.

Chosen in mid-2017, the propulsion configuration "will supply ample on-board energy for the mission system, and provide proper redundancy to limit restrictions when operating over European densely populated ground and [in] unrestricted airspace", the programme's three main industrial players say. 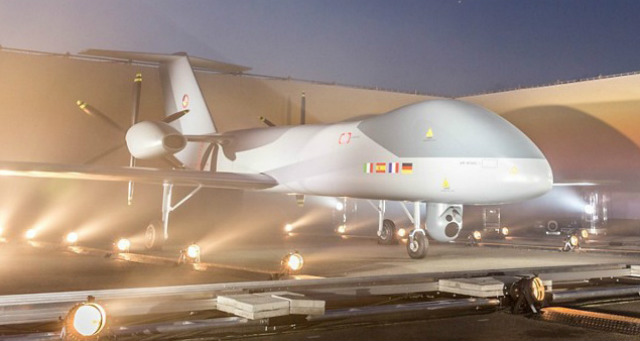 Intended to enter use from the middle of the next decade, the MALE RPAS will offer European governments a sovereign capability, rather than relying on equipment provided by the industries of Israel and the USA. A system requirements review was completed in January, with a system preliminary design review activity scheduled for the end of this year.

"While a lot of work lies ahead of us, this model represents a first milestone of what Europe can achieve in a high-technology sector if it bundles its industrial strength and know-how," says Airbus Defence & Space chief executive Dirk Hoke. "This innovative partnership also eases the countries' constrained budgetary situation through clever pooling of research and development funds."

Airbus, Dassault and Leonardo describe preparations for the programme's combined development, production and initial in-service support phase – likely to commence during 2019 – as "well under way". The project will be managed on behalf of its parent nations' militaries by Europe's OCCAR defence procurement agency.

Meanwhile, defence electronics specialists Elettronica, Hensoldt, Indra and Thales used the ILA show to offer what they describe as a "future-proof" package of mission system equipment for the MALE platform. Covered by a new memorandum of agreement, their proposal includes "all elements, from sensors and computing through data processing and communications".