From his office at KLM's headquarters in suburban Amstelveen, chief executive Pieter Elbers can look out some 5km across Amsterdam Forest to the city's Schiphol gateway, though only the control tower is visible above the trees.

Having his office at the tip of the tri-spurred block's southwestern flank, Elbers not only has a view towards the home base of what is the world's oldest airline that still operates under its original brand – Koninklijke Luchtvaart Maatschappij, or Royal Dutch Airlines – his office also points in another significant direction: towards Paris.

The Dutch carrier merged with Air France in 2004, Europe's biggest airline deal at the time. Under the combination, both retained their own identity and operations. But while KLM has been profitable for much of the last decade, Air France – which took a senior role in the combined company – has been beset by labour tensions and cost challenges. The net profit at the French unit last year was only its second in the last eight years. 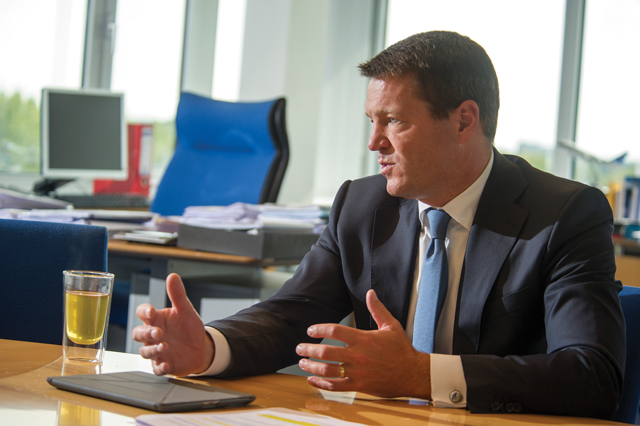 The differing financial fortunes and labour relations of the two carriers, particularly in recent years, have added their own strains to the relationship. That was underlined when less than a month after taking over the helm of Air France-KLM, group chief executive Jean-Marc Janaillac acknowledged in July that tensions existed between the two airlines as their relationship was "complicated", with a "common lack of vision within the group". He stated: "We need to work on rebuilding this ambition and enthusiasm that existed when the group was created."

Elbers supports Janaillac's view that Air France-KLM must rebuild bridges to its staff. "I think with all the challenges we are having, a unity internally is an extremely important factor. And whatever we can do or we support to strengthen that... so much the better," he says.

But he adds that KLM has "already moved quite a bit" over the past two years to improve staff relations. This includes employee engagement sessions, establishment of social media platforms, and mailboxes to contact senior management about business enhancement ideas. It is "going quite well" and has led to cost benefits worth more than €10 million ($11.2 million), he notes.

He emphasises that Janaillac's remarks were directed, in particular, at Air France, where labour relations have been strained for several years. As Janaillac joined the company, Air France pilots staged industrial action in June, followed by a flight-attendant walkout in July. Nevertheless, Elbers admits that "going forward with the difficult issues we are having at hand... we need to continue to ensure, to safeguard that we keep the engagement and we keep the connection [with employees across the group]".

A central source for tensions between the airlines has been an agreement to maintain a capacity ratio between Air France and KLM's long-haul operations, which was arranged for the merger and allocates the majority of capacity to Air France. French pilot unions in particular have said that the accord has been violated as KLM increased capacity, while growth at Air France was stifled in the absence of labour agreements about efficiency improvements. This led to a curious situation where, apparently, success and growth at KLM created discontent at Air France.

Elbers insists the two airlines' long-haul networks have developed in an "extremely balanced way" as a result of the capacity allocation. "[This] in itself is a very remarkable thing... When the agreement was made in 2004, I am not sure we could all predict exactly what [would] happen over the next 10 years – and it has worked, it has functioned very well."

What this highlights perhaps more than anything else is the complex partnership between the two carriers. Elbers – who must on the one hand represent the interests of KLM employees and stakeholders, and on the other be loyal to the group – credits Air France for having achieved "very significant improvements" during recent years.

Elbers does not exclude KLM from such efforts and says it too must raise productivity further. While the carrier agreed new collective labour agreements with pilots, flight attendants and ground personnel in 2015, disputes continue with unions in all three sectors about further measures. Pilot and flightcrew unions separately launched legal action in August against management plans to change terms of statutory pension increases.

He says the capacity agreement must not prevent KLM from raising efficiency and growing its business – even without the sister carrier, if necessary. "It doesn't help KLM or its employees or its customers to look to... Air France and say: 'Hey, because they are not making progress, we should not move.' I think it is in the interest of KLM, its employees, its customers and eventually also in the interest of Air France-KLM that we continue to move forward."

How Air France and KLM support and strengthen each other has arguably been less clear than with the other two large European network airline conglomerates, IAG and Lufthansa Group. They have been dominated by their largest constituent airlines – British Airways and Lufthansa, respectively – which serve major home markets, while their sister carriers concentrate on other areas.

Air France and KLM both operate extensive intercontinental networks from their Paris Charles de Gaulle and Schiphol hubs, located about 500km (311 miles) apart. But as the Netherlands represents a comparatively small home market, KLM has a long tradition of feeding its long-haul flights with a closely knit network across Europe – and that places KLM as a competitor, rather than a natural ally, to Air France.

Africa is a region where the two airlines' routes complement each other much more, with Air France traditionally serving countries with French links in West and North Africa, while KLM concentrates more on the continent's eastern region.

Elbers acknowledges that "compared to the others, the roles of Air France and KLM as two carriers are probably... the most similar. Even BA with its London orientation and Iberia with its South America orientation are more distinct."

While the wave of consolidation among US carriers has consigned to history several established brands – the likes of Continental Airlines, Northwest Airlines and US Airways – the situation is different in Europe. While there is a practical incentive for retaining national carriers, in terms of ensuring international route rights are maintained under bilateral deals, airlines still play a national role in their countries. That role, in turn, informs the airline's identity and customer appeal.

"We chose to keep our brands," says Elbers. "Airlines are mostly driven by our frontline staff. If we see our pilots and cabin crew, I think it is very important for us [that] our people are our brand... They represent and breed the brand, and it is two very distinct and own brands.

"We have a fantastic opportunity, having two strong hubs... having quite a few passengers flowing over each other's network, and yet having these very distinct brands," he adds. Air France-KLM passengers are able to route journeys with one of the two airlines and use the other for the return trip.

Behind the customer-facing operations, Air France and KLM are particularly benefiting from their co-operation, in Elbers's opinion. "I think the level of integration is much further than many people would believe." Back-office functions, such as administration, sales and IT services, are joined up, and Elbers argues that there is no need for closer integration or potential restructuring. In order to raise the group's performance, he thinks, "it is more of matter of reigniting the spirit, rather than making very significant organisational changes... We have done all that."

Elbers also highlights greater market share as one central advantage KLM enjoyed through linking up with Air France. Pointing to the recent Olympic games in Rio de Janeiro, he says: "One out of five Brazilians travelling to Europe is travelling with Air France-KLM. We would never have such a position by ourselves." That situation, he adds, is similar on routes to Asia and the USA.

Greater market share also translates to a stronger position when it comes to building partnerships with other airlines and suppliers, in Elbers' view. As allies such as Delta Air Lines and China Southern Airlines are larger than Air France-KLM, he says: "In order to deal in this world of giants, we need to have size – and the combination with Air France has provided us with this size."

Air France-KLM's parallel order of the Airbus A350 and Boeing 787 – both of which are to be employed at the two airlines – was a prime example of the group gaining economies of scale through pooled investments. However, Elbers points out this is equally relevant for other, less visible expenditure, such as modern IT systems that cover the entire group and perhaps partners too. "If we see the investments we need to do in digital [technologies], these are massive and you cannot do them by yourself."

The build-up of KLM's leisure subsidiary, Transavia, as the group's answer to growing competition from low-cost carriers could have been a team-building exercise for Air France-KLM. The group intends to establish Transavia as Europe's third-largest budget carrier after Ryanair and EasyJet. But this project too has become a source of conflict with employees – particularly at Air France – and division among the group.

In March, Transavia opened its first base outside France and the Netherlands in Munich. But the operation with four Boeing 737s and locally recruited staff has been set up and managed by Transavia's Dutch division alone, while concessions were made to unions that prevent the carrier from operating flights to France from the German city.

French pilot unions have criticised Transavia's expansion because, they argue, management is using group profits to establish a budget carrier to the detriment of Air France in what amounts to "industrial and commercial suicide" of the mainline. In September 2014, Air France pilots went on a two-week strike against plans to set up Transavia bases outside France and the Netherlands. Management even considered a merger of Transavia's separate French and Dutch operations into a single unit.

But the group eventually backed down and decided to keep the two national operations separate with individual air operator certificates and management teams. Transavia France's operations were expanded with additional aircraft and routes from its home country, while the Dutch sibling's operations were concentrated at Schiphol from a previous set-up with multiple bases.

In 2015, the international growth plans resurfaced again – and this time Transavia's Dutch arm was engaged for the task. Elbers rejects a view that the split between the two Transavia units is a reflection of a larger conflict between the parent carriers. Instead, he argues that "it is good that the Munich base could start" in the first place and that passenger numbers in the Bavarian capital show customer acceptance of Transavia outside its home market.

Elbers justifies the decision to keep Transavia's Dutch and French operations separate because the two carriers have different requirements and need time to become equal partners. The Dutch division was established in 1965 and now operates more than 40 aircraft. Its French sibling launched flights in 2006 as a joint subsidiary of Air France (60%) and Amsterdam-based Transavia (40%). It has a smaller fleet, but has grown more rapidly over the past two years.

Nevertheless, Elbers concedes that solutions must be found for Transavia's French operation to shoulder growth plans outside France too. In the context of any Transavia expansion plans beyond Munich, he says: "Going forward, of course, we need to find an appropriate way of structuring that [growth]."

Can Elbers imagine Air France-KLM being led by a Dutch chief executive and, thus become a truly equal partnership? "I have no clue," he responds – and smiles quietly for a moment. However, he quickly shows a pragmatic, no-nonsense attitude again. "If we had had a CEO in the post for eight years and [he] was about to retire, it would have been a relevant point of discussion, you could have some philosophical discussion about it... But I think for us, the focus really is how to make it successful and how to make sure we gain traction again."