German flag-carrier Lufthansa’s historic flight foundation Lufthansa Berlin Stiftung is intending to restore a Lockheed L-1649 Starliner to airworthy condition after acquiring three of the type at a bankruptcy auction in the .

After being retired from service with various operators the three Starliners were acquired in the mid-1980s by aviation enthusiast Maurice Roundy, a manager at fixed-base operator Silver Wings Aviation, who subsequently embarked on an ambitious project to restore the aircraft.

Roundy’s long-running efforts had mixed results, with N974R making a 30min ferry flight to in 2001. But speaking to FlightGlobal after the 18 December auction, Roundy conceded that the time had come to hand the restoration to an organisation with more substantial resources.

“I have laboured for 25 years to save these historic aircraft,” he says. “I believe that they represent industrial artwork of the finest kind. I will never be compensated for all the money and time I have invested over the years, but that is not what it is about when it comes to saving artwork.

“It is time to pass the torch to people that can get the job done, and at least one of them back into the air. To fully appreciate the beauty of the aircraft, it must be seen and heard in the air.” 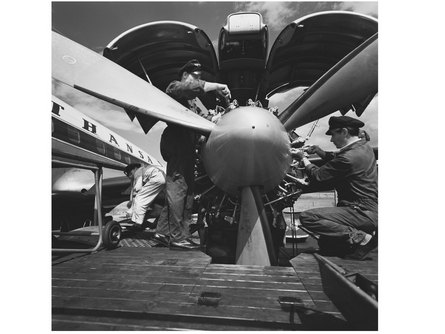 Flying for the first time in 1956, the triple-finned Starliner was a long-range derivative of the Lockheed Constellation, designed to counter the DC-7C. Only 44 of the type were constructed from Lockheed’s overall production output of 856 Constellation variants. The aircraft, which typically seats around 100, is powered by four Wright R-3350 engines.\

It bid for all three Starliners sold by the Portland-based Keenan Auction Company, and is thought to have offered $225,000 for each – a total cost of $748,000 inclusive of spares and taxes.

A spokesman for Lufthansa says maintenance division Lufthansa Technik will work on the Starliners in the in order to “make one aircraft airworthy again”, using former employees who had experience of the aircraft while it was in service with the airline during 1957-68.