Passenger traffic as measured in RPKs in October was 44% higher than the same month last year and reached 74.2% of 2019 levels. That is a fractionally higher than 73.8% of pre-pandemic traffic reported in September. 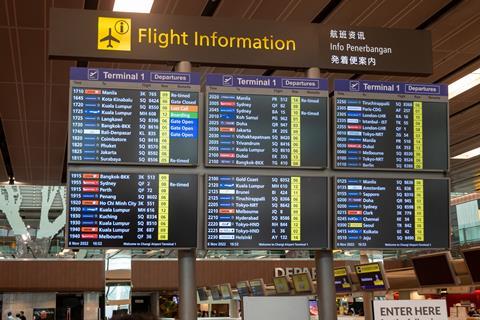 IATA director general Willie Walsh says: ”Traditionally, by October we are into the slower autumn travel season in the northern hemisphere, so it is highly reassuring to see demand and forward bookings continuing to be so strong. It bodes well for the coming winter season and the ongoing recovery.”

The improvement was driven by international markets, as Covid restrictions continue to be eased. International traffic doubled in October over the same month last year. By contrast, domestic traffic was fractionally down on October 2021, reflecting the impact of continued restrictions in the key Chinese market.

IATA says forward bookings have increased to around 75% of pre-pandemic levels for international travel following market reopenings in Asia, while domestic bookings remain at around 70% of 2019.