Singapore Airlines will operate at 50% capacity until end-April and is looking to shore up liquidity.

“Given the growing scale of the border controls globally and its deepening impact on air travel, SIA expects to make further cuts to its capacity,” the carrier says in a statement. 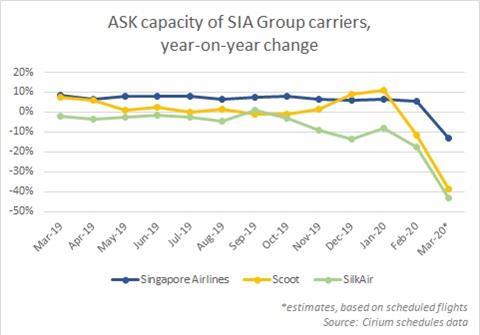 Without elaborating, it adds that it is “actively taking steps to build up our liquidity” and will “consult the unions once again as [the SIA Group] urgently takes steps to further cut costs”.

Chief executive Goh Choon Phong says: “We have lost a large amount of our traffic in a very short time, and it will not be viable for us to maintain our current network. Make no mistake – we expect the pace of this deterioration to accelerate. The SIA Group must be prepared for a prolonged period of difficulty.”

Based on existing schedules, ASK capacity of mainline carrier SIA is expected to fall by 13% year-on-year in March, versus marginal declines for the first quarter of the year, Cirium schedules data shows.

Likewise, SilkAir and Scoot expect to see a 43% and 39% reduction in March, respectively, versus declines of 23% and 13% for the January to March period.