Royal Air Force Panavia Tornado GR4 crews flying missions over Iraq and Syria are poised to benefit from a defensive update developed by Leonardo and recently approved for operational use by the UK Ministry of Defence.

Named BriteCloud, the countermeasures update comprises an active, expendable decoy which is capable of luring an incoming radar-guided missile away from a host aircraft, resulting in what the company describes as “a large miss distance”.

Carried within a fighter’s standard chaff and flare dispensers, the “drinks-can-sized” device contains electronic radar-jamming equipment. Leonardo began development activities in 2012, working in collaboration with the RAF and the UK’s Defence Science and Technology Laboratory, and the system underwent successful trials in the USA last June.

“First deliveries of the decoys to the RAF will take place this month,” Leonardo confirms, adding that the technology “will be available for use by Tornado GR4 crews in the near future.” 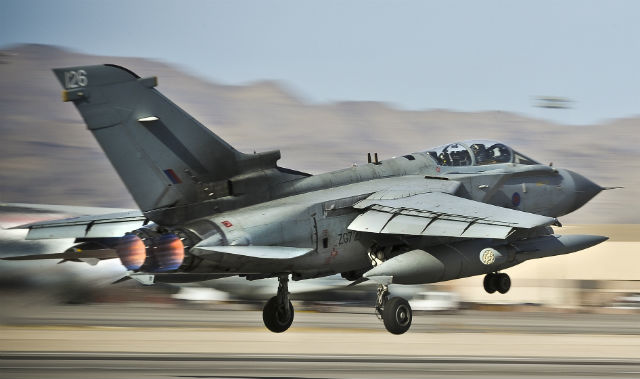 Initial confirmation of the BriteCloud system’s pending service entry came during comments made by chief of the air staff Air Chief Marshal Sir Stephen Hillier in London on 27 March. Speaking at a Royal Aeronautical Society lecture to mark the centenary of the RAF’s formation – a milestone which falls on 1 April – he said the Leonardo decoy “is now ready for deployment: and easily adaptable for other platforms”.

Leonardo produces the BriteCloud decoy at its Luton site in Bedfordshire.

The RAF’s remaining two squadrons of Tornado GR4s are scheduled to be retired by April 2019, with the type’s capabilities to be assumed by the service’s Eurofighter Typhoons via the Project Centurion activity, and subsequently by the UK’s incoming fleet of Lockheed Martin F-35Bs.