French investigators believe the crew of the Ethiopian Boeing 737 Max which crashed nearly four years ago experienced rapidly-developing stress from a stick-shaker alert on take-off, even before they found themselves fighting against the aircraft’s MCAS stabiliser-trim system.

Investigation authority BEA has highlighted crew failings which began when the loss of an angle-of-attack sensor during take-off triggered the stick-shaker.

BEA says the stick-shaker should have prompted the crew to apply stall-recovery procedures from memory – including applying nose-down input and disengaging the autopilot and autothrottle.

“Only the nose-down input was performed by the flight crew,” it states. “The autothrottle remained engaged and the pilot later insisted on engaging the autopilot.”

Engineering simulations, it says, demonstrate that the pilots would have been presented with airspeed and altitude ‘disagree’ messages, and should have run a checklist for unreliable airspeed – which also requires autopilot and autothrottle disengagement, adopting a 10° nose-up pitch and a specific thrust setting. 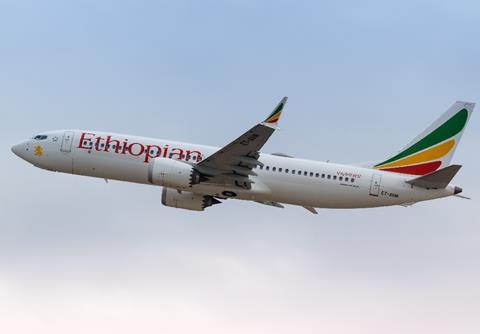 But the Ethiopian Airlines captain did not disconnect the autothrottle and instead attempted to engage the autopilot, despite being below the autopilot height threshold set by the airline.

“This premature action, although not appropriate in stick-shaker conditions, may be symptomatic of a state of stress that had been rapidly developing following the activation of the [stick-shaker] immediately after take-off,” says BEA.

It says the first officer – who had just 300h experience – appears to have been “overwhelmed” by events from the point at which the stick-shaker triggered.

The authority claims parts of the cockpit-recorder transcript, which illustrate the first officer’s difficulties, have not been included in the final report into the 10 March 2019 accident.

“Co-ordination and the communication between the captain and the first officer were very limited and insufficient,” says BEA.

“There was no discussion nor diagnosis with respect to the nature of the events on board. The situational awareness, problem solving and decision making were therefore deeply impacted.”

The lack of thrust reduction meant the aircraft accelerated to excessive speeds and made manual control against aerodynamic forces extremely difficult when the false angle-of-attack data, combined with other logic conditions, led MCAS to issue a series of uncommanded pitch-down inputs.

BEA argues that crew-performance aspects of the accident – particularly those which emerged before the MCAS activation – are “insufficiently addressed” by the Ethiopian investigation, comments which parallel recent remarks from the US National Transportation Safety Board.

It says the crew’s failure to apply checklists, use of autopilot contrary to procedures, failure to reduce thrust, and inadequate use of electric trim to relieve high control forces should have been the subject of further explanation.

“Shortcomings relating to the crew’s actions, particularly in the first phase of the flight, is not accompanied by a thorough analysis of the reasons for the behaviours observed, in relation with their training [and] their experience,” says BEA, adding that the omission is “regrettable”.