Alaska Airlines will operate more than half of the 24 planned commercial flights from Paine Field in Everett, Washington, when service commences early next year. 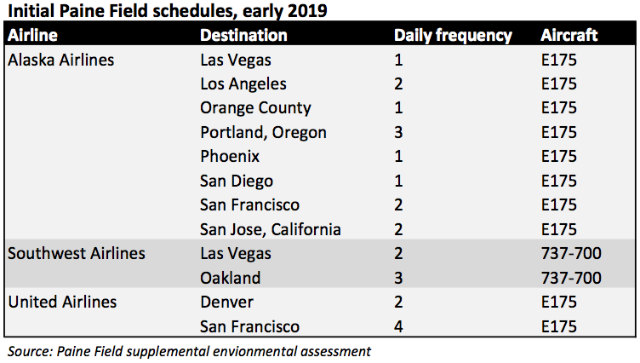 Snohomish County, which operates the airport, conducted the supplemental assessment for the US Federal Aviation Administration to evaluate whether the planned service patterns would have a different impact than what was assessed in 2012.

The county finds no additional impact from the planned flights and asks the FAA to approve the beginning of service in early 2019.

Commercial air service to Paine Field, which is also the home to Boeing's final assembly lines for the 747, 767, 777 and 787 aircraft, has been discussed and studied since 2008, when Allegiant Air sent a letter of intent to serve the airport to Snohomish County. While an environmental assessment opened the door to flights at the end of 2012, a deal for a new passenger terminal was not signed until 2015.

That terminal, designed, built, financed and operated by private Propeller Airports, is set for completion by the end of the year.

Paine Field will act as a secondary airport to the Seattle area, located nearly 36km (22 miles) north of the Seattle city centre.

"As our region continues to grow at a record pace and Sea-Tac airport nears capacity, the time is right to bring air service to our valued guests living in the north Sound," said Brad Tilden, chief executive of Alaska, when flights to the airport were announced.

Seattle Tacoma International continues to hit annual passenger records, with 2017 numbers up 2.6% to 46.9 million. The airport is in the midst of several multi-million expansion projects, including adding eight gates to the north satellite for Alaska, and build a new international arrivals facility catering to Delta Air Lines and foreign carriers.

Alaska, Southwest and United all previously announced plans to serve Paine Field, with Alaska and United outlining their planned destinations but not schedules.