Qatar Airways has launched its new economy-class product, ‘Quisine’, which includes additional leg room, faster broadband and a new in-flight dining experience. Alongside the unveiling at the ITB travel-trade fair in Berlin, the airline also revealed seven new destinations for 2019. 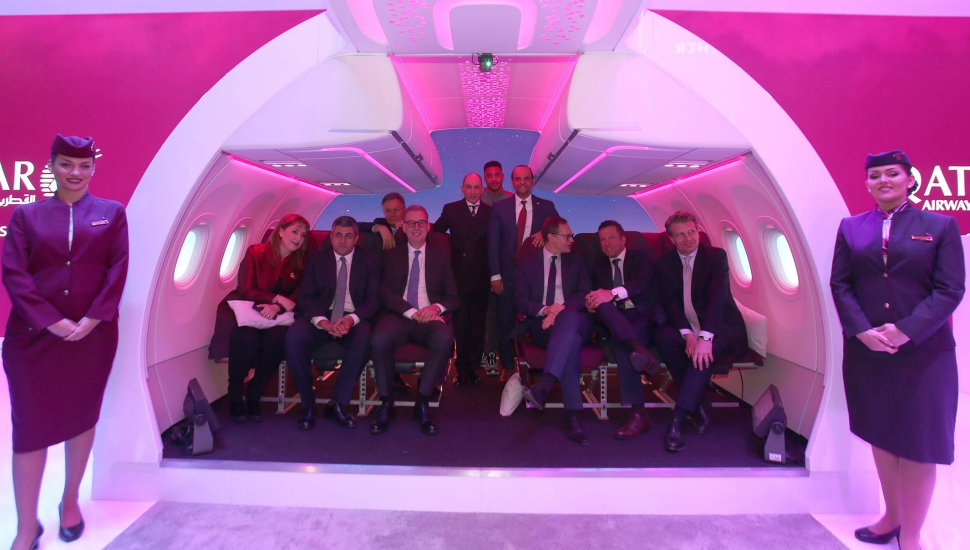 The Qatar delegation at ITB Berlin

The new economy-class seat will feature a 19-degree recline, adjustable lightweight headrests, dual trays and more legroom. “It [the seat] has an innovative, semi-fixed back-shell so that when you recline you don't intrude into the space that the passenger behind you has," said Qatar Airways group chief executive Akbar Al Baker, speaking at ITB."It has comfortable taking and landing with a pre-reclined position of six degrees. So the seat, already semi-reclined, gives you additional comfort."

After being introduced on Airbus A321neos, the seat will be rolled out across the entire Qatar Airways fleet in “a project that will last anywhere between five and eight years”, says Al Baker. He notes: “We cannot do it tomorrow because we have a lot of airplanes that are very young and we cannot really remove the already very enhanced and comfortable seats that fly on our airplanes.”

Each economy seat will also have a "13.3in" (34cm) 4K widescreen with over 4,000 entertainment options. "You will always have a guaranteed space around you. And it has a lot of amenities around it which you will only find in many business classes and premium economy," says Al Baker.

There is a new dining programme, called "Quisine", which will have new tableware and more menu choices. Meals will also be more substantial, with main courses 25% larger, appetisers 20% larger and desserts 50% larger.

Al Baker said of the seven new destinations for 2019: “It is only seven for your consumption; we have another seven which we'll do after the middle of this year."

In late May, the Oneworld carrier will launch thrice-weekly single-aisle services to Izmir in Turkey and Moroccan capital Rabat. In each case, the frequency will initially be thrice-weekly but there is an intention to increase it to daily.

In June, daily flights will start to Malta and Portuguese capital Lisbon, as well as a Boeing 787 service to Davao in the Philippines. The Davao service will initially be only weekly, “because of the shortage of aircraft we have at Qatar Airways”, says Al Baker. “It all depends on how fast we can get deliveries from our aircraft manufacturers.”

Of the Lisbon service, he notes: “We have waiting for this for a long time. Fortunately, now we have received the slots.” He adds that Qatar intends to reveal two additional Portuguese destinations before the end of the year.

The list of new destinations announced at ITB is completed by Somalia’s capital Mogadishu, to be served thrice-weekly from 1 July, and Langkawi in Malaysia, to which there will be five 787 flights per week from 15 October.