American Airlines will begin using the first part of what will become a new regional concourse at Ronald Reagan Washington National airport later this month.

The first section of aircraft apron - the pavement that will one day serve the new concourse's northern side - with six regional aircraft parking positions is due to open during the week of 22 April, airport operator the Metropolitan Washington Airports Authority (MWAA) says. The ramp includes three spaces for aircraft to park overnight. 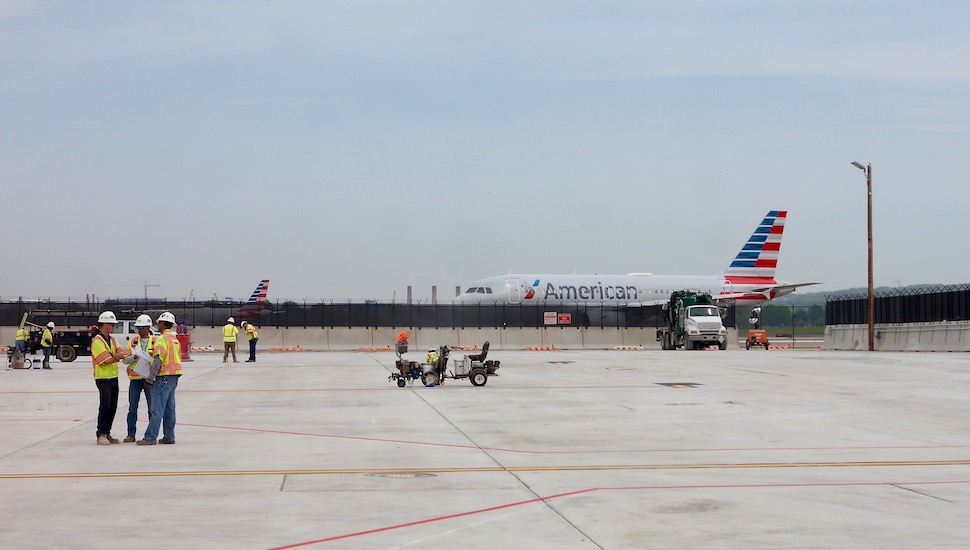 "We're moving very fast," says Greg Trojan, project environmental health and safety manager at Turner Construction, on a tour of the new ramp for FlightGlobal. Turner is contracted to build the new concourse.

The concourse is part of the larger $1 billion Project Journey works that also include new security checkpoints. When complete, all four concourses – the existing three plus the one under construction – in terminal B/C at Washington National will be connected inside security.

The new apron and aircraft parking positions replace existing ones where work on the new concourse moves to next, says Trojan. The steel structure of the facility will begin rising in "about a month", he adds. 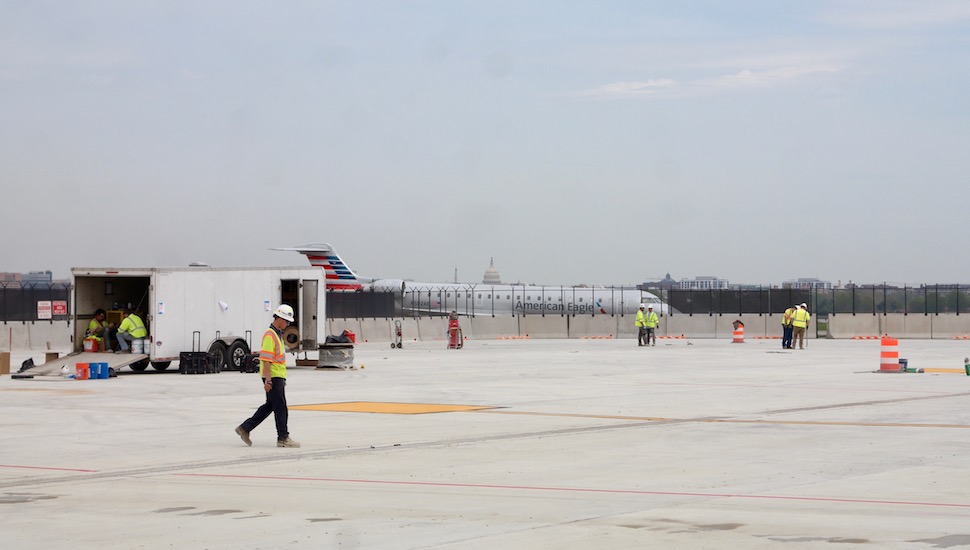 The concourse is on schedule to open by July 2021, while the security checkpoints are a few months behind schedule due to inclement weather and are expected to open by February 2021, MWAA executives said at the operator's monthly boarding meeting on 17 April.

The security works, also known as the secure National Hall project, were scheduled to open in late 2020.

American, which operates a hub at Washington National, plans to take full advantage of Project Journey when work is complete. The Fort Worth, Texas-based carrier will shift flights operated by 50-seat regional jets to larger ones with up to 76 seats when the 14-gate concourse opens. The existing remote parking positions are restricted to the smaller-sized aircraft.

The bus operation from gate 35X at the airport is widely disliked by Washington DC-area travellers.

Rendering of the new concourse at Washington National

Vasu Raja, vice-president of network at American, told FlightGlobal in December that the Project Journey works are "critical enablers" of the airline's growth plans at Washington National. He affirmed plans to upgauge flights to larger aircraft but did not provide additional details.

The carrier is already flying more larger aircraft through Washington National. Seats are up 1.5% on 0.4% fewer flights year-over-year in the first six months of 2019, Cirium schedule data shows.

American is focusing growth at its three most profitable hubs – Dallas/Fort Worth, Charlotte and Washington National – over the next few years. It is adding more than 100 flights at Dallas/Fort Worth this summer under its "DFW 900" initiative, plans to boost Charlotte to roughly 700 flights a day next year, and will begin upgauging fights at National from 2021.

New facilities enable growth at the three airports. The carrier moves into a renovated 15-gate satellite at Dallas/Fort Worth airport in May, adds four more gates at Charlotte by the end of 2019, and will gain the new Project Journey concourse at Washington National in two years.

While not expected to impact American's plans for Washington National, the on-going grounding of the Boeing 737 Max may limit its growth this year. The airline will report first quarter earnings on 26 April and is expected to provide an update on the impact of the suspension.

American has removed the 737 Max from schedules through August, resulting in the cancellation of up to 115 flights a day.

The airline has previously said it will grow capacity by roughly 3% in 2019.

Updated with the number of new remote aircraft parking positions.