Textron Aviation has pushed back the first flight of its Cessna Denali turboprop to an unspecified time due to slower-than-expected testing of the aircraft's GE Aviation Catalyst engine.

Textron Aviation has pushed back the first flight of its Cessna Denali turboprop to an unspecified time due to slower-than-expected testing of the aircraft's GE Aviation Catalyst engine.

The Wichita-based airframer had planned for the 8- to 11-passenger Denali to fly this year and to complete certification in about 18 months.

But GE Aviation has needed more time to fulfil new engine testing requirements, and Textron says it now expects to receive the first Catalyst turboprop from GE Aviation in 2020. 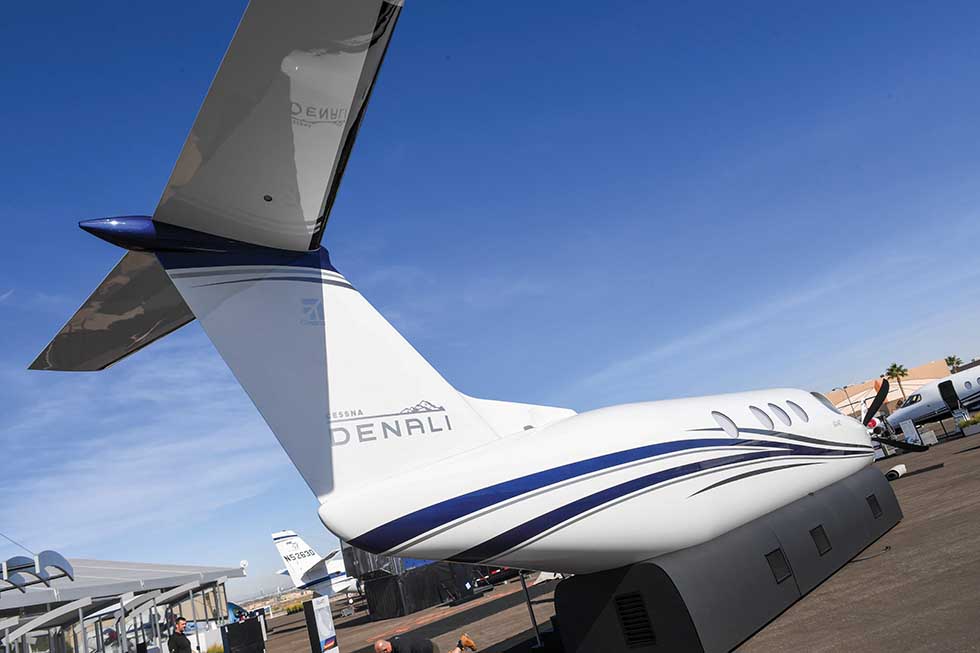 Cessna has brought the Denali mock-up to NBAA

"Given the delay in the engine delivery, we are not putting a timeline on first flight of the Denali," Textron says. The company made the announcement at the NBAA business aircraft show in Las Vegas.

"We continue to make good progress on the Denali development programme and are nearing wing-mate of the prototype aircraft," the company adds.

GE Aviation says the delay reflects eight new turboprop testing requirements implemented by the US Federal Aviation Administration over the past ten years. Those new requirements largely relate to icing tests, it says.

"We are going through the most-extensive certification testing ever for a turboprop engine in this segment," says GE Aviation vice-president and general manager of business and general aviation Brad Mottier. "There are eight significantly updated regulatory requirements for turboprops."

"We have had a schedule this year to source, build, equip and fly the engine, and we didn't accomplish all of that on schedule," says Mottier. "Putting all these test facilities up and running and completing everything has been a real challenge."

Despite these delays, GE Aviation says its Catalyst test programme is hitting milestones.

The company has logged some 1,600h of Catalyst tests, including 1,200h of engine operation in test cells and 400h of tests in compressor rigs. It has carried out more than 1,000 engine cycles and tested the engine up to an equivalent altitude of 41,000ft in an altitude test chamber.

It has completed altitude, endurance, vibration, durability and ingestion testing, and testing of the engine's integrated propeller controls.

"It's absolutely clear that we meet or exceed all performance metrics for the engine," says Mottier.

GE Aviation's next big step is to fly the Catalyst on its own flying test bed, a milestone that requires it acquire and modify a flight test aircraft. That work will be completed in Europe, Mottier says.

GE Aviation has assembled five development Catalyst engines and expects to complete another two before year-end.