How will Dubai air show orders play out in 2019?

Predicting the likely commercial air transport order activity every two years at the Dubai air show is nigh-on impossible at the best of times, let alone with the extra layers of uncertainty currently underpinning the airline industry.

Predicting the likely commercial air transport order activity every two years at the Dubai air show is nigh-on impossible at the best of times, let alone with the extra layers of uncertainty currently underpinning the airline industry.

From the glut of business in 2013 – when Airbus and Boeing rolled out orders and commitments for more than 600 aircraft from four airlines on the first day alone, and little else for the rest of the show – through to just the handful of announcements which followed in 2015, Dubai has tended to veer between famine and feast when it comes to aircraft orders.

Two years ago the show had both. The lead-up, and much of show itself, was dominated by talk of whether home carrier Emirates would seal a programme-saving follow-on order for the A380. While the show closed with no A380 deal – Emirates did tentatively sign for 40 Boeing 787s as its only business – there was still late order drama for Airbus as private equity group IndiGo inked a memorandum of understanding for 430 A320neos across its four low-cost carrier interests. 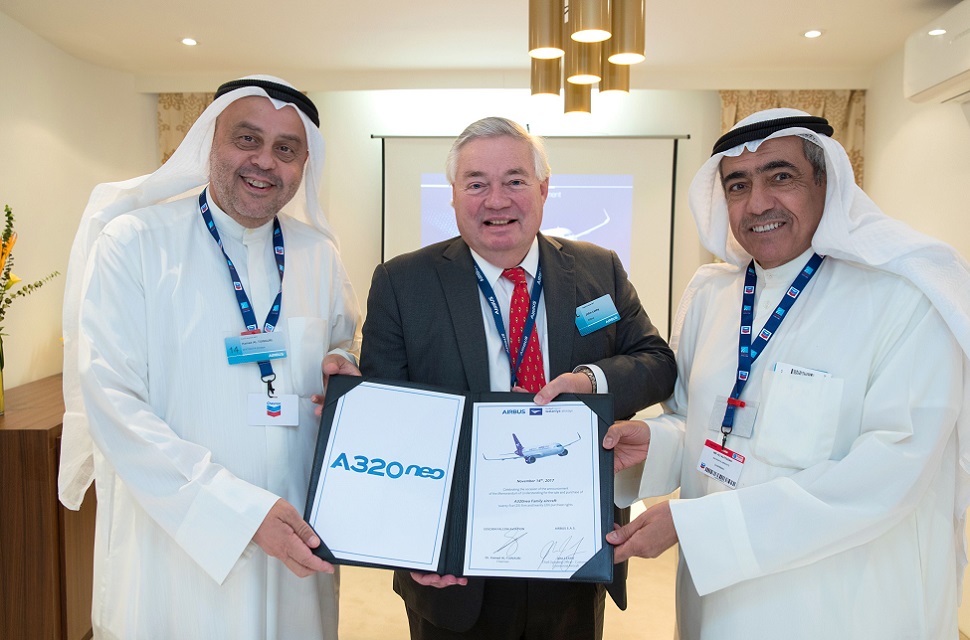 Wataniya Airways’ tentative, and ultimately short-lived, A320neo deal was one of the few announced during the 2017 Dubai air show

In short, Dubai either delivers record numbers of orders or just a handful; opens with a bang or closes with a grande finale; relies heavily on local carriers to order big or is dominated by a massive order from a group with airline interests almost everywhere except the Middle East.

Adding to this is a cautious market climate. Rising costs and an economic climate made more fragile by ever deeper trade tensions mean the airline industry is braced for some likely quieter years in terms of demand and tougher financial conditions.

And of course, the grounded Boeing 737 Max – the type which has driven much of the company’s orderbook in recent years – continues to cast a shadow over the US airframer. Not only do questions remain about how Boeing will approach the show in terms of its profile, but airline decisions on new narrowbody commitments are made more complex as only one supplier is currently able to deliver aircraft.

Most predicted the contrite and relatively low-profile Boeing that took to the stage at this summer’s Paris air show. Few, however, foresaw the genuine show-stopping commitment from IAG for Max aircraft announced there.

WHO COULD ORDER AIRCRAFT AT DUBAI?

With Etihad Airways still restructuring and the continued diplomatic spat leaving Qatar Airways out of the spotlight for this show, Emirates is the only one of the Gulf majors in the frame to order aircraft.

Emirates could seal the A330neo and A350 aircraft for which it tentatively signed earlier this year as a way unpicking the A380 commitments it eventually made a few months after the 2017 Dubai show – commitments that ultimately failed to save the programme.

The airline’s president Tim Clark told FlightGlobal at the start of September that the firming-up of its deal for A330neos and A350s, both of which are exclusively powered by Rolls-Royce, has been delayed due to concerns about the engines’ ability to meet its specific performance requirements.

“We were ready and willing to complete that contract months ago. But we have some concerns that [Rolls-Royce] is not in a position to give us engines under our rules of the game,” Clark states. It remains to be seen if these issues have been resolved in time for an air show announcement.

The Middle Eastern carrier is also a launch customer for the 777X with orders for 150 aircraft, and it holds a memorandum of understanding with Boeing for up to 40 787-9s and -10s. The 787 commitment is expected to be incorporated into a revised contract for the 777X.

Saudia indicated earlier this year that it is seeking to replace Boeing 747-400s and move away from wet-leased capacity, and pointed to a potential twinjet acquisition, although there was no timeline. Its budget arm Flyadeal disclosed an A320neo agreement in July, but this has not yet appeared on the Airbus order backlog.

In the neighbourhood of Dubai, Sharjah-based low-cost carrier Air Arabia is closing in on an order for more than 100 narrowbodies. An existing Airbus customer, Air Arabia chief executive Adel Ali told FlightGlobal at the recent Arab Air Carriers’ Organization’s annual meeting in Kuwait that it was seeking more information from Boeing. He says a decision is expected either before the end of this year or early in 2020.

Oman Air has outlined plans for a fleet harmonisation, but has not indicated the extent to which additional aircraft might be required.

Royal Jordanian could also be in the frame for a Dubai announcement. It has been linked with a new narrowbody order covering 18 aircraft. The airline’s chief executive Stefan Pichler was last month quoted by Reuters as saying it expected to secure board approval for the deal during October.