Sense and avoid capability development on schedule for Swiss Hermes 900

Switzerland is planning to operate its future Hermes 900 unmanned air vehicle fleet in its domestic airspace, and work is under way by manufacturer Elbit Systems to certify a sense-and-avoid system aboard the type.

Bern contracted Elbit to provide six of the medium-altitude, long-endurance UAVs under a $256 million deal signed in 2015, which will be delivered in 2018 with a comprehensive co-operative and non-cooperative sense-and-avoid collision avoidance capability.

“This will be the first customer to operate the full capability,” says Danny Israeli, vice-president for business development and strategy for Elbit’s intelligence surveillance, target acquisition and reconnaissance division.

“We are dealing with the development of a component to fly in national airspace,” he adds. “That is part of the contract and that is where the main effort is being made. It will introduce some unique elements to the system.”

The development is running to schedule, he says, and will include the identification of both co-operative and non-cooperative targets, with the latter utilising a radar/electro-optical sensor.

Certification of the Hermes system will be carried out by both Swiss and Israeli authorities, he says.

The integration of a sense-and-avoid capability to enable flight alongside manned aircraft is a key concern of many European UAV operators, and Israeli industry is clearly catching on to the trend.

Israel Aerospace Industries announced recently that it had teamed with Honeywell to offer such a capability for the Heron family of UAVs. This is probably in response to a long-standing German requirement for a collision avoidance systems for its unmanned fleet. 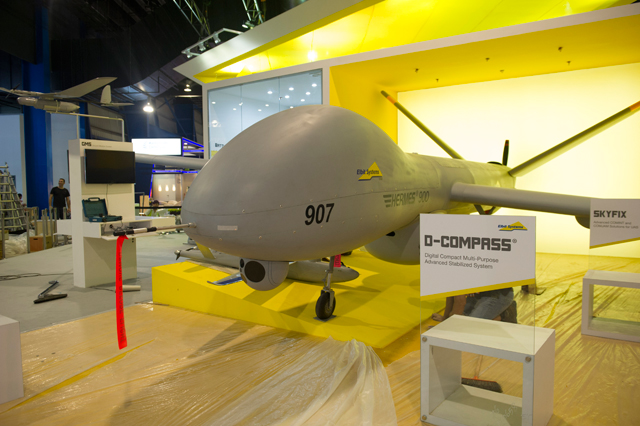 Meanwhile, Elbit’s relationship with the Polish company PGZ has deepened as the two companies have agreed to work together to offer the Hermes 450 UAV for Warsaw’s tactical UAV requirement, and will co-offer it internationally.

“We have just signed an agreement with them … for the Gryf programme, and we know that it will involve a transfer of technology to Poland,” Israeli says.

The Gryf requirement is for an armed tactical UAV, but Israeli could not offer any detail on the weapons offered, although he says that will be the only key modification.

“Right now, the Hermes 450 in its current configuration offers all of the requirements for the Polish MoD,” he says. This includes electro-optical, communications intelligence, electronic intelligence and mapping payloads.