An investigation is under way into a fatal collision involving of a pair of German air force Eurofighter combat aircraft near Rostock on 24 June.

The two jets were part of a formation of three single-seat Eurofighters from the Luftwaffe's 73 Squadron, which had taken off for a training flight from their base at Rostock airport, close to the Baltic Sea.

One of the pilots died during the accident, while the other – an instructor – was rescued alive, the Bundeswehr says.

Both pilots operated the ejection seat following a "contact" between the two aircraft, around 20min into the flight, the Bundeswehr says.

The pilot of the third aircraft involved in the mission observed two parachutes descending to the ground.

None of the jets were equipped with weapons, the Bundeswehr notes.

German broadcaster ARD reports that wreckage from the two aircraft was found approximately 5.4nm (10km) apart in the Muritz lake district area in the northeast of the country.

The flight-data recorders of both aircraft were found on 25 June. 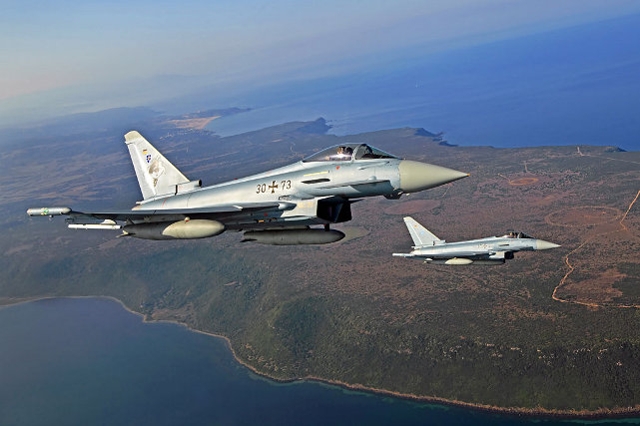 The Bundeswehr has launched an investigation into the cause of the accident.

The accident represents the Bundeswehr's first loss of a Eurofighter since the type's introduction with the force in 2004.

In 2014, a German air force Eurofighter was involved in a mid-air collision with a Bombardier Learjet 35A during a training flight for both aircraft.

The Eurofighter had intercepted the Learjet and was attempting to escort it to an air base as part of a quick-reaction alert training exercise, when the two aircraft collided.

The Learjet crashed – killing both occupants on board – while the Eurofighter pilot recovered and landed safely.